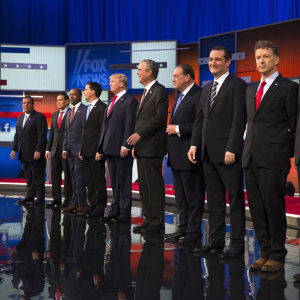 A Revolution in the GOP?

Super Tuesday was a great night for Donald Trump, with some pundits even labeling the evening as “Super Trump Day” as the real estate mogul had a total of 7 state wins. Coverage of the night was sensational, with network talking heads describing the Trump candidacy as a hostile takeover of the GOP, or even a transformational revolution in the Party of Lincoln. For any other Republican presidential candidate, going 7 for 11 would arguably make that candidate the presumptive nominee. Donald Trump is now clearly the favorite to win the nomination, and if this were to happen, for many reasons it would mark a break with the party’s Reaganite past, and even potentially lead to realignment in the parties.

Do Trump’s wins reflect a revolution by the rank-and-file against the Reagan coalition as some suggest? Don’t believe the hype. Even after winning the Nevada caucuses with 46 percent of the vote by more than twenty points, on Super Tuesday, Donald Trump won only 34.2 percent of votes cast. Thirty four percent support does not a revolution make. What then, explains the strangeness of this endlessly bizarre election season and the apparent inevitability of Trump?

A recent post by Patrick Ruffini identified a number of “lanes” in the Republican party based on correlations between Iowa county-level support for candidates and county-level US Census variables. Ted Cruz and Ben Carson fell into the conservative, or Tea Party, lane, associated with married families and people born in state, while Trump and Huckabee inhabited a Jacksonian lane, associated with high county unemployment rates and Scots-Irish or “American” ancestry. Meanwhile, there was a crowded mainstream lane including Rubio, Kasich, Bush, Paul, and Christie, associated with higher presence of college graduates and geographic mobility.

Sean Trende and David Byler recently argued that Donald Trump’s political skill and personality allowed him to earn three times as much media coverage as all the other candidates combined. In the Jacksonian lane, then, it is no surprise that Trump was able to quickly consolidate in his lane, as is visible in the table below. Donald Trump’s hold over one third of the Republican primary electorate cannot by any fair analysis be considered to be a popular revolution among the GOP ranks. However, with Trump in the presidential race, the Jacksonian lane has swelled to encompass more voters than it has held ever before. In a two-person primary race against George H.W. Bush in 1992, Pat Buchanan won 23% of the vote, and Buchanan’s most obvious successors, Mike Huckabee in 2008, and Michele Bachmann and Rick Santorum in 2012, had only 16.8 percent and a combined 8 percent in the RCP averages on December 7, 2007 and 2011, respectively. The Jacksonian lane was large this cycle already, but thanks to Donald Trump’s considerable political talent and generous media coverage, it has expanded to its largest extent in the post-Reagan GOP.

Consideration of the 2016 horserace in terms of Ruffini’s three data-driven lanes illustrate a fascinating autumn shift followed by stability, which helps explain Trump’s current dominant position, as well as the difficult challenge facing his rivals. Jeb Bush’s support peaked on July 15th, two days after Scott Walker entered the race. Unfortunately, Ruffini’s lanes only consider those who made it to Iowa. If we include Christie, Paul, Rubio, Kasich, Graham, Pataki, Jindal, and Fiorina with Walker and Bush, mainstream candidates had the support of half the electorate as the final entrants to the race emerged in the summer after a long period in which Bush was the frontrunner.

During the late summer and autumn, Jeb Bush steadily sank in the polls as Carson experienced a boomlet in the Tea Party lane which was quashed by Cruz, and Trump consolidated his position in the Jacksonian lane. A month and a half before the Iowa caucuses, each of the three lanes held about 30 percent of the vote, with 10 percent undecided, and at this point each lane more or less froze in place. It is remarkable that after nearly a month of Trump victories the frontrunner has only increased his lane’s support by 3 percent given the past performances of the frontrunners’ lanes in 2012 and 2008. Trump and the Jacksonian lane’s unusually poor momentum suggests he faces his own tough slog to exceed 50%, even as his opponents struggle to defeat him. 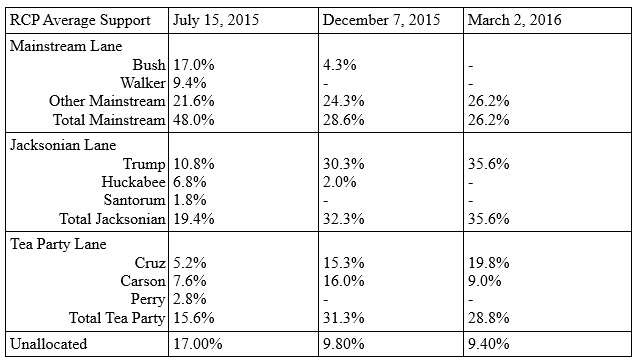 Donald Trump and his unprecedentedly-large Jacksonian coalition currently can count on the support of only a third of the Republican electorate, and there is reason to believe he is not reaping the benefits of momentum frontrunners in recent cycles have enjoyed on the Republican side. While Trump’s development of his own lane is historically impressive, it is by no means revolutionary. What is extraordinary is that the mainstream lane failed to coordinate on a single candidate.

Perhaps more accurately, mainstream lane elites coordinated on a candidate who never won the support of mainstream voters. After Mitt Romney announced he would not run for the nomination in January 2015, Jeb Bush cornered the market on the major fundraisers on the Republican side. However, Bush faced challenges from many within his own lane, notably Scott Walker, and after Walker’s announcement, Bush was never able to recover. While Bush held the resources needed for a mainstream lane candidate to consolidate his position, as a candidate (perhaps because of the unusually talented field of mainstream opponents, being caught flatfooted by Trump’s unexpected trolling, or aversion to his last name) he was unable to close the deal with his lane’s voters. As a result, the normally dominant lane in the GOP could not unite until well into the primary season. If there was a revolution against party elites, it was a revolution by mainstream Republicans against the candidate chosen by mainstream donors in favor of other mainstream candidates.

The story of the mainstream lane’s failure to coordinate on a single candidate capable of consolidating support and reaching out to the conservative lane and undecideds is the real story of the 2016 election. This is where the script of the primary season has truly been upended, not through any mass insurgency led by Donald Trump to redefine Reagan’s GOP.