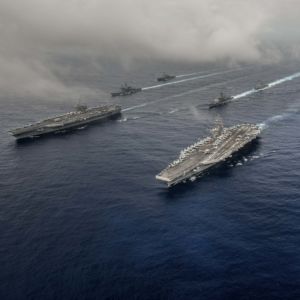 With pride, Americans point to the U.S. Navy as the mightiest in the world, now or ever. But China is in the midst of a campaign to try to surpass us. The People’s Liberation Army Navy has developed an aggressive strategy to try to outstrip the U.S. Navy by outnumbering us eventually and outpowering us.

Fortunately, our leaders are paying attention and are devoted to preventing this.

But the story is different when the topic turns to commercial ships instead of military vessels. Cargo ships are also a national security issue. Ninety percent of the world’s trade travels by ship, and whoever controls that trade has a tight grip on the world economy.

Yet some groups urge that America should give up on maritime commerce, letting other nations control not only international trade but also allowing them to take over the domestic shipping between U.S. ports.

They would do this by repealing a law called the Jones Act. Opponents of the legislation argue that it’s cheaper to let foreigners do this work, but they ignore the fact that the supposed savings are due to foreign governments subsidizing their commercial fleets. The issue at hand is subsidies, not free enterprise.

We should never surrender to countries that try to buy a global maritime monopoly. They’ve been doing this for many years, which is why the situation has become so bad.

The Bureau of Transportation Statistics reports that now only 182 of more than 41,000 oceangoing cargo ships are American (0.4 percent). The vast majority are from subsidized China, South Korea or Japan. Meanwhile, of the 2,873 ships (as tracked by the shipbrokers BRS Group) currently being built worldwide, only eight of those commercial ships are being built in America. China is building 1,291 of them, Japan 697 and South Korea 475.

Foreign countries subsidize both their airlines and their ships. For years they have been buying global trade routes by providing massive subsidies for building ships and for operating them. America doesn’t; we ended such subsidies during the Reagan years.

A Harvard study found that in 2006 China designated shipbuilding a “strategic industry” and since then, “Chinese subsidies dramatically altered the geography of production and countries’ market shares.” This aid gives them an estimated 13-20 percent advantage in ship construction costs, which then is boosted further by lower wages and regulations. And once built, the U.S. Maritime Administration estimates that China pays an additional $7-million per year per ship to reduce the operating costs.

Many other countries have similar plans, but none as massive as China’s.

Anti-Jones Act interests claim we could save money and get cheaper shipping costs by taking advantage of these subsidies and letting foreign ships take over our domestic trade routes. On a purely economic basis, this is short-sighted.

Monopolies always raise their prices once they corner a market. On a national security basis, this would put our trade at the mercy of other countries. And when military emergencies create the need to use commercial vessels to carry men and equipment, repealing the Jones Act would end that reserve force.

The whole debate can be summarized as part of the continuing conflict between globalists and the philosophy of putting America first.

Can we succeed? Yes, and history gives us an example of how. When we depended on foreign oil there were many who claimed we could never achieve energy independence. But thanks to the dynamism of free enterprise, the pessimists have been proven wrong.

Likewise we can recover our strength on the seas; we can negotiate an end to unfair trade policies and foreign subsidies. Then America can again be the commercial shipping power that we once were. But in the meantime, the worst possible thing would be to end the Jones Act.

Ernest Istook is a former Republican congressman from Oklahoma. He now practices law and teaches political science, and is a Distinguished Fellow with the Frontiers of Freedom Foundation. He wrote this for InsideSources.com.