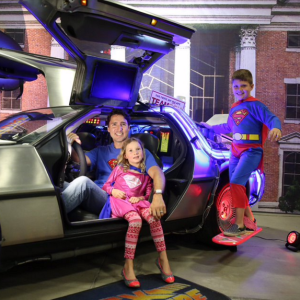 Canadian Prime Minister-designate Justin Trudeau and family in the Back to the Future DeLorean. (via Twitter)
[IS] Opinions

Back to the Future: Liberals Seize Majority in Canadian Elections

Posted to Politics October 21, 2015 by Maryscott Greenwood and Andrew Shaw

In the iconic 1980’s movie, Back to the Future II, Marty McFly traveled through time to October 21, 2015 where electric cars hover above the streets, Jaws 19 is showing in theaters, and the Chicago Cubs win the World Series. When the first Back to the Future was released in 1985, Pierre Trudeau had just stepped down the previous year from serving as Canada’s Prime Minister and head of the Liberal Party of Canada. Fast forward to present day, Pierre Trudeau’s son – Justin Trudeau – has led the Liberals to victory in yesterday’s federal elections.

Canada’s 42nd General Election yielded a number of firsts. It was the first election in Canada’s history in which a political party went from third to first. The Liberal Party earned the largest increase in seats in history as well as winning or leading in 184 of 338 available seats as of the vote count this morning. The Prime Minister designate has also said he will form a cabinet divided equally between men and women, another first for Canada. The turnout for this election is reportedly about 68%, the highest since 1993. The length of the campaign – 78 days, is the longest in Canada’s modern history.

The Liberal Party will form a majority government not because they won a majority of the popular vote, but because they won a majority of seats in the House of Commons. The popular vote, still being counted, tallies the Liberal vote at about 39.5% as of this writing. The leader of the Conservative Party, Prime Minister Stephen Harper, has said he will retain his seat in Parliament, but step down as party leader. The right-of-center Conservatives will become the official opposition party on pace to take 103 seats in the House, replacing the socialist New Democratic party, who has been reduced to 35 seats. The Quebec separatist party, the Bloc Quebecois has 10 seats, and the Green Party has one seat, belonging to their leader, Elizabeth May.

One of Mr. Trudeau’s top agenda items will be to fulfill a campaign promise to cut middle class taxes and raise taxes on wealthy Canadians. During the campaign, the Liberals defined middle class as earners with an income of $45k-90k and wealthy was defined as over $200k.

It is also expected that Mr. Trudeau will embark on an ambitious international travel schedule shortly after being sworn in by the Governor General. He has indicated his intention to represent Canada at the G20 Summit in Turkey on November 15-16, as well as the Asia Pacific Economic Cooperative scheduled for the Philippines on November 18-19. Mr. Trudeau has pledged to participate in the Paris Climate Talks, leading a delegation of Canada’s provincial premiers.

Speaking of Paris, the new federal government in Canada could offer an opportunity to accelerate the energy and climate relationship between Canada and the US. While Mr. Trudeau supports Keystone XL, he campaigned on pursuing a more aggressive climate approach, including convening, within his first 90 days in office, a meeting of all Provincial leaders to develop a common climate change framework. This approach could expedite coordination between the US and Canada during this December’s Paris United Nations Framework Convention on Climate Change conference.

In North America, Mr. Trudeau’s victory could also spur more integration between Canada and the US on renewable energy. Notably, EPA’s Clean Power Plan allows states to credit Canadian renewable energy imports to the US in complying with CO2 reduction requirements under the rule. Finally, the Canadian election may spur increased integration of North American carbon markets. California and Quebec already share a common carbon market, and they could be joined by Ontario, New York, and potentially other states and provinces.

The Canadian election was notable for its pivot from the Conservative’s depiction of Mr. Trudeau as “just not ready,” to Mr. Trudeau’s mantra of “ready for change.” The Liberals ran an essentially positive campaign, focusing on a new generation of leadership for Canada, with the 43-year-old Justin Trudeau at the helm. When he arrives at 24 Sussex, it will be a homecoming as Justin Trudeau has not lived there since his father was Prime Minister in the late 1970’s. Father and son serving as Prime Minister – another first for Canada. It’s Back to the Future in Canada.

Scotty Greenwood and Andrew Shaw are with Dentons' public policy and regulation practice in Washington, DC, where they both specialize in U.S.-Canada relations.