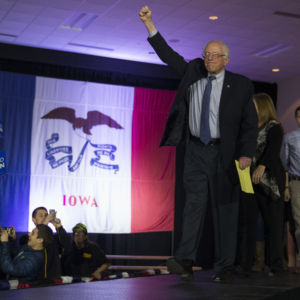 The Unity Reform Commission proposes releasing raw vote totals in next Iowa caucus, something that the Bernie Sanders campaign thought would have helped him gain momentum in primaries. (AP Photo/Evan Vucci)
News

Since 1974, Iowa’s ‘First in the Nation’ Caucuses have served as national events, kicking off presidential election seasons and often setting the tone for who takes the Oval Office. For over 40 years, both the Democratic and Republican Parties have tailored their caucus efforts to produce the best results possible for their respective parties. In a recent bout of proposed reforms however, the Iowa Democratic Caucuses stand to see major changes, some that could possibly call into question its first in the nation status.

“I think the main answer [for the reforms] will be to preserve [the caucuses],” said Tim Hagle, associate professor of political science at the University of Iowa College of Liberal Arts and Sciences. “Every four years, Iowa comes under plenty of criticism, for both the Republican and Democratic side, for the caucuses because they’re relatively small compared to any state that has a primary, especially when you compare it with New Hampshire, which has a primary immediately after, or eight days later, but also with other bigger states.”

At the recommendation of the Unity Reform Commission (URC), a branch of the Democratic National Convention (DNC), the reforms are tailored around increasing transparency and accessibility to Iowa voters.

The most significant change that parts ways completely with tradition, is the fact that the URC recommends the use of paper ballots to vote for candidates. Previously at the Iowa Democratic Caucuses, participants were put into a room, where constituents physically had to walk to portions of the room that signified a particular candidate they preferred. A head count would then be taken of the voters who support the particular candidates.

The next part of the process would then involve a tally up of the votes to decide a candidate’s “viability,” or whether or not the particular candidate took a minimum of 15 percent of the precinct’s vote. If the candidate didn’t reach viability, the supporters were then encouraged by other candidate supporters to change their vote (or the constituents could just leave and not have his or her vote counted).

Under the current caucusing process, delegates for the Democrats are assigned proportionately to how the candidates did in the various precincts, with the media reporting the winner based on the total amount of delegates a candidate received. Parting with that longstanding practice, the URC recommended actually publishing the amount of votes that a candidate received in the caucusing process, regardless of whether or not the candidates were viable.

“The problem to some extent, is that you can have a candidate that gets 14 percent support in every precinct in the state, but because of that 15 percent threshold, it would look like the person got zero percent anywhere,” said Hagle. “So it’s misleading.”

Hagle explained that in the 2016 Iowa Democratic Caucuses, the Hillary Clinton-Bernie Sanders race, the Sanders campaign argued that they might have had enough votes to win Iowa, but because the raw votes weren’t released, there was no way to know.

“So, you know there is a lot of momentum that goes into those kinds of things,” Hagle said. “With Bernie Sanders, if he had actually won Iowa — the argument goes — that meant he would have had more momentum going into New Hampshire.”

Hagle said that most people understand raw vote totals better than delegate totals, but the URC’s recommendations are unclear about how the numbers would be reported, and if both totals would be displayed at the same time, as well as the potential impact of showing a discrepancy if a candidate wins the popular vote, but also has less delegates going to convention.

However, by releasing raw vote totals for candidates, Iowa could run into trouble with New Hampshire, which has a state law that states it must be the first primary election in the nation. Currently, Iowa goes ahead of New Hampshire because it is a caucus.

“These have been complaints that people have expressed for a while,” Hagle said, “but one reason why the Democrats were concerned about making some of these changes before is that they didn’t want to run afoul of New Hampshire.”

Hagle said that the Democrats were a little more concerned about this fact than the Republicans, in that they wanted to not release raw numbers because that would make it seem to resemble a primary.

Iowa Democratic Party Communications Director Tess Seger said that during the URC’s deliberations, it was felt that the Iowa Democratic Caucuses were a “party building” exercise.

“Throughout the Unity Commission process, we felt more and more support growing for the Iowa Caucus as people learned what they were and learned how we functioned,” Seger said. “Their primary function is a party building exercise — so getting folks out and having conversations in their communities. We are still going to have to look at the actual process and implementation of these recommendations and obviously we will be working closely with our New Hampshire counterparts as we do. We’re still taking a look at how this is all going to shake out.”

Additionally, the URC also proposed changing who can participate in a caucus. To participate in a democratic caucus currently, constituents need to attend one of Iowa’s 1,681 precincts by 7 p.m., on a particular date in January or February (depending upon the calendar year), and remain at the caucus, sometimes beyond four hours, in order to have their vote count. The reforms propose allowing full absentee voting participation for those who have mobility and distance challenges. Recently, the Iowa Democratic Caucuses have experimented with tele-voting with members of the military in active duty or with people out of the country during the caucus. There have also been experiments in setting up satellite precincts for those who cannot drive far distances to attend a caucus.

Hagle said “it’s really hard” to say how absentee ballots would possibly work. He understood the possibility of having a video feed, but that having a video feed for every single person registered to a precinct would be challenging.

One of the things Democrats have had concerns with in Iowa and other states, Hagle said, is that there are people who want to attend a caucus, but can’t get off work, or are disabled, or are unable to because of weather. How the caucuses will account for that remains to be seen.

A full report of the URC’s recommendations is expected to be released by the end of the week, according to Seger, with a formal vote by the DNC to occur after that.