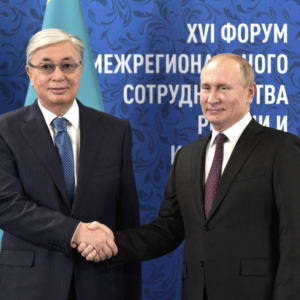 However, even as Congress prepares to vote on revoking PNTR for Russia, it is still quietly considering legislation that would grant this same powerful trade status to Kazakhstan, a country that historically has acted as a Russian proxy.

Understandably, our lawmakers are eager to nudge the former Soviet-bloc country toward democratization. But, before we formally offer Kazakhstan preferential trading status, we should ensure Congress has fulfilled its due diligence. Offering Russia PNTR in 2012 has proved to be a miscalculation; we need to make certain the new Kazakh administration addresses past economic and government corruption before making the same mistake twice.

For the last 30 years, Nursultan Nazarbayev, a pro-Russian strongman and previous president of Kazakhstan, led his country’s economy by installing a system of rampant kleptocracy. During his presidency, Nazarbayev pivoted hard toward the Kremlin and modeled the Kazakh economy after Russia’s.

The Nazarbayev government leveraged Kazakhstan’s wealth of natural resources to court foreign investors. However, the revenue generated by the influx of foreign funds largely fell into the hands of greedy oligarchs. Kazakhstan quickly gained a reputation in international circles for corruption, and the Kazakh government’s penchant for judicial bribery and embezzlement is well documented. Potential investors have been warned to stay away.

Now, for the first time in decades, a new regime has a chance to push the Kazakh economy in the right direction. After events in January sparked political upheaval, Kassym-Jomart Tokayev, the newly installed president of Kazakhstan, stands at a fork in the road between corrupt cronyism and liberal democracy. For the time being, Tokayev’s early statements suggest that he’s serious about instituting economic reform. Recently Tokayev offered “open-door opportunities” to international corporations looking to do business in Kazakhstan, taken steps to remove corrupt bureaucrats from power, and pledged to roll back Nazarbayev-era profiteering policies and practices.

While Tokayev’s promising statements are certainly cause for optimism, our elected leaders shouldn’t jump at the first opportunity to offer such premier economic status without witnessing the Kazakh government take concrete steps toward making significant reforms and amending the misdeeds of the Nazarbayev regime. Lawmakers should ask the Tokayev government to take meaningful measures in rebuilding mutual trust, like returning unfairly seized foreign assets and honoring business agreements with American companies, before granting permanent normalized trading relations.

President Biden and our leaders in Congress have the chance to further pressure Russia by welcoming Kazakhstan to the western world. However, we need our elected leaders to proceed with caution and avoid inadvertently propping up a budding autocrat masquerading as a democratic reformer. President Tokayev is taking the first steps toward making those needed reforms, but we all know actions speak louder than words.

Carol A. Murphy, a Democrat, is a member of the New Jersey General Assembly. She wrote this for InsideSources.com.