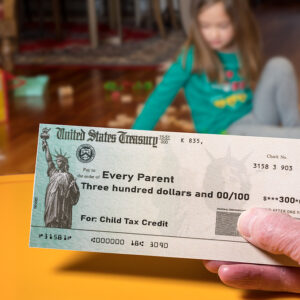 Democrats Tout Child Care ‘Tax Cut’ — But Is It?

On July 15, millions of moms and dads across America found cash in their bank accounts thanks to the Child Tax Credit (CTC) included in President Joe Biden’s American Families Plan. Parents received $250 or $300 per child “without having to take any action,” the White House notes. Democrats have been quick to take credit.

Pennsylvania’s Sen. Bob Casey participated in a Democratic event “highlighting the local impact of Democrats’ new tax cut for middle-class families,” according to a statement from the Pennsylvania Democratic Party.

And President Biden called the CTC “one of the largest middle-class tax cuts ever.”

Sen. Marco Rubio (R-Fla.) doesn’t think so. He calls the CTC a “radical expansion of the federal welfare state.”

“By next tax season, some households with no working adults will receive more than $10,000 in these payments. No work required. Just free money on top of America’s existing safety net,” Rubio wrote.

That includes families who pay no net federal income taxes.

What’s more, the 2021 CTC is “fully refundable,” meaning that even if you have no income or didn’t pay taxes last year, you are still eligible to receive the credit.

“Parts of the [American Rescue Plan] Act do, in fact, reduce income tax burdens on many filers,” the National Taxpayers Union Foundation (NTUF) says, “However, the bulk of the ‘tax cuts’ underlying [the claims] do not actually reduce anyone’s taxes. Instead, they show up in the budget as spending, including the ‘recovery rebate’ stimulus checks.”

The CTC is not considered income, and will not be subject to additional taxes. This mirrors other stimulus payments that have been sent out since the COVID-19 pandemic began.

Or as Rubio put it, “Why [do] they keep calling this program ‘tax relief’ when it goes to people who pay no taxes?”

For Americans who do pay income taxes, it’s possible some may have to pay back part or all of the payments when it comes time to file taxes next year.

For example, if a parent ends up receiving more than they’re entitled to under the CTC, that money will be paid back to the government. If the number of qualifying children changed or children moved into a different age bracket, it’s possible some parents will receive too much with the advance payments.

Ironically, the CTC will end up costing taxpayers more in the end, says the National Taxpayers Union (NTU). The Treasury Department estimates that if the program were extended for four years, it would cost roughly $112 billion per year, totaling around $449 billion.

Sen. Mitt Romney (R-Utah) has proposed several ideas to make the CTC more responsible, including reforms and changes to existing programs such as the state and local tax deduction (SALT), Earned Income Tax Credit (EITC), and other overlapping programs. Romney’s proposal would also make the CTC more of an anti-poverty measure, eliminating payments to Americans who, in some cases, make six-figure salaries.

As Democrats push the CTC to be a permanent fixture, the NTU notes that not all of that money will be reserved for those who truly need it.

Tony Sheaffer is a freelance journalist living outside Baltimore, Md. He wrote this for InsideSources.