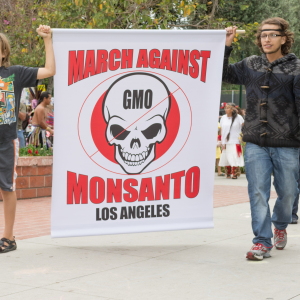 Protesters rallied against GMOs earlier this year in Los Angeles

In 1997, the late Carl Sagan published a book titled “The Demon-Haunted World: Science as a Candle in the Dark.” It is an eloquent paean to the power of science and critical thinking to free humans from the demons of darkness and superstition.

Unfortunately, darkness and superstition are still very much with us.

A prime example: the Los Angeles City Council voted in late October to draft an ordinance that would prohibit the sale or planting of genetically modified (GM) seeds and plants.  While the practical impact of this ignorant posturing would be nil, no GM crops are even grown in Los Angeles County, the symbolic impact of the political leaders of Los Angeles slamming the door on the technology that offers some of the best (if not the only) hope of producing improved drought tolerant crops, or rescuing California’s wine and citrus industries from exotic pests and diseases, is alarming to say the least.

The City Council asserts their action is necessary “in the absence of State or Federal action”, and because of “various concerns regarding the use of GM products, including but not limited to the safety of consumption of GM foods.”

Where do you start when everything somebody thinks they know is wrong?

First, there has been a coordinated, multi-agency national policy in place regarding GM crops and foods since 1986. It involves USDA, EPA and FDA, each tasked with their own responsibilities as well as a requirement to consult and coordinate with their sister agencies. Furthermore, scientists around the world are more united in their recognition of the safety of crops improved through biotechnology than they are on the reality of anthropogenic climate change.

It should also be noted that biotech improved seeds change farming in ways that dramatically reduce the risks to beneficial insects and non-target species of both plants and animals. This means that the very seeds LA wishes to ban, in fact,  reduce dramatically the negative impacts on biodiversity of the single human activity more destructive of biodiversity than any other, which happens to be… agriculture!

Finally, of the 18 million farmers growing biotech improved seeds around the world, the kind of seed the LA City Council wants to ban, 17 million of them are small holders in developing countries. These are the folks who have benefitted most, empowered by the environmental improvements and economic uplift delivered by crops improved through biotechnology. The kind of folks the LA City Council claims to be concerned about.

The facts are against the LA City Council in each and every particular as the LA Times has noted. But as cognitive psychology has begun to clarify  for us, sharing facts in an effort to persuade somebody in the grip of a hallucinatory ideology can, ironically, serve to reinforce their mistaken beliefs.  In the end, it’s really about values, not facts.

This action may have been well-intentioned, but it may have been nothing more than shameless pandering to the superstitions of uninformed constituents misled by unscrupulous special interests. In either case, it fails every test of science, economics, environmental health and common sense. It is actions like this that led Mark Twain to observe that “No man’s life, liberty, or property are safe while the legislature is in session.”

Val Giddings is a Senior Fellow with the Information Technology and Innovation Foundation.