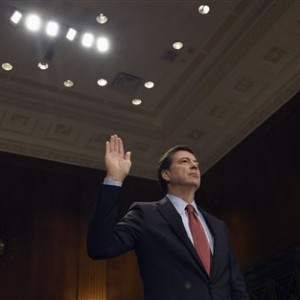 FBI Director James Comey is sworn in on Capitol Hill in Washington, Wednesday, Dec. 9, 2015, prior to testifying before the Senate Judiciary Committee. Comey said the two San Bernardino shooters were radicalized at least two years ago and had discussed jihad and martyrdom as early as 2013. (AP Photo/Susan Walsh)
[IS] Opinions

President Donald Trump’s unexpected firing of FBI Director James Comey amid the FBI’s investigation into potential ties between the Trump campaign and Russia during last year’s presidential election has thrown the country into what one U.S. senator called a “full-fledged constitutional crisis.” With Trump’s brazen move, the focus must be squarely on holding the president accountable and appointing a special prosecutor to ensure that the Russia investigation continues.

Beyond the Russia investigation, the firing of Comey also undermines the very integrity of America’s democratic system. The president of the United States fired the man in charge of an active investigation into the president’s own campaign. The shock should reverberate and consume us. This is a moment when the fate of American democracy is at stake.

However, the future of American democracy isn’t the only thing Trump has endangered by abruptly dismissing Comey. As this process plays out, Americans should be vigilant not only against the dangers to American democracy but also to American security and the potential for conflict abroad. President Trump is now more dangerous than ever.

First, Americans should beware the possibility that Trump wants to “busy giddy minds with foreign quarrels.” In other words, will Trump start a conflict abroad to divert attention away from the Comey fallout?

The United States is already involved in conflicts in Afghanistan, Iraq, Syria and elsewhere, and recent reports indicate that Trump is about to ramp up the U.S. troop presence in Afghanistan. Trump has on and off been rattling the sabers with North Korea. Meanwhile, the praise that Trump received after he launched strikes in Syria last month likely sent him the wrong message about how to boost his popularity, a dynamic that could play out now in spades.

Second, other countries will now increasingly see a weak president threatened by political turmoil at home and try to take advantage. Challenges to U.S. interests could come in many places, from Russia ramping up the conflict in Ukraine to further provocations by North Korea to more chemical attacks in Syria. The list of threats goes on, and Trump may already be inclined to fight to take attention away from his troubles at home. What makes this scenario particularly challenging is that these are all very real and serious threats that cannot go unanswered.

If the situation wasn’t ripe enough for a crisis, defenders of President Trump in Congress and in the media are clearly looking for excuses to avoid the Russia investigation and shift attention elsewhere.

This is not merely a hypothetical scenario — we’ve seen the dangers faced by the United States when a president is embattled by scandal. In October 1973, as the Yom Kippur War between Israel and its neighbors in the Middle East raged, tensions between the United States and the Soviet Union were rising fast, stoking fears of a direct U.S.-Soviet conflict.

At the same time, President Richard Nixon was mired in the Watergate scandal. On October 20, Nixon had just executed the Saturday Night Massacre by ousting the two top Justice Department officials after they refused Nixon’s orders to fire the person in charge of investigating Watergate.

On a particularly fateful night — October 24, 1973 — at the height of the U.S.-Soviet tension, Nixon reportedly told Secretary of State Henry Kissinger that Congress needed to know how essential Nixon was in handling the Middle East crisis to take the Watergate pressure off. Later that night, as conflict between the U.S. and U.S.S.R. appeared a real possibility, Nixon was asleep, drunk, and not even present at the decisional meetings of the U.S. government.

We are now faced with a similar recipe for disaster. The U.S. president is embattled. By nature Trump is unable to let go of obsessions, and recently has “grown enraged by the Russia investigation.” Criticism of Trump often sparks tweet storms from the Oval Office, revealing an incredibly thin skin. Conflicts can start in a matter of minutes.

The focus of the American people and its leaders now must be on holding the president accountable, unearthing whether or not he obstructed justice by firing Director Comey, and appointing a special prosecutor to get to the bottom of the investigation into ties between the Trump campaign and Russia. And that also means watching Trump like a hawk and any moves he makes in these foreign hotspots to prevent him from busying giddy minds with foreign wars.

Michael H. Fuchs is a senior fellow at the Center for American Progress. From 2013 to 2016 he was deputy assistant secretary of state for east Asian and pacific affairs.