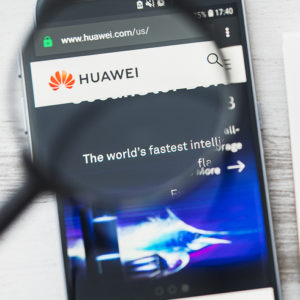 Federal Ban on Huawei Protects Both National Security and Consumers

This week, an interim regulation comes into effect to ban federal agencies from buying telecommunications and surveillance products from Huawei. The law is well overdue—in addition to protecting American intellectual property, the rule will finally help to safeguard the privacy of American citizens.

Despite Huawei’s insistence that it complies with American law, the company has shown a consistent and repeated disregard for the most basic principles of American commerce. From violating sanctions on selling American technology to Iran to blatantly stealing American inventions, the company allegedly rides roughshod over American regulations, both inside and out of the United States.

Even if Huawei’s executives are sincere in their intentions, many argue that the Chinese legal system enables Communist Party apparatchiks to compel the company to do their bidding. With no choice but to comply, Huawei’s position within the American telecommunications infrastructure becomes a liability.

It was because of security concerns like these that Australia, Japan, and New Zealand restricted Huawei’s participation in their 5G rollout. The problem is that even if the Chinese equipment appears benign, there is the risk that back doors and secret capabilities could be concealed within it.

Whether purposefully or due to a lack of innovation, the company’s products stand accused of being riddled with vulnerabilities. These flaws make security systems defenseless against state-backed or criminal hackers.

In addition to providing the company with another route to misappropriating American intellectual property, these vulnerabilities could be used to disable or shut-down American infrastructure at times of crisis. With the company and its affiliates posing such an enormous risk to American national security, today’s interim regulation couldn’t have come sooner.

But American consumers also have reason to be wary of the risk Huawei presents. Putting aside the detriment that prolific IP theft causes to American innovation, having Huawei embedded in telecom infrastructure poses a fundamental threat to consumer privacy.

In February 2018, America’s top spy chiefs warned that Huawei products threaten the privacy of American civilians, as well as the resilience of the country’s infrastructure. Private financial, health, or personal data could all be made available to foreign entities with little recourse.

Similarly, at a time when foreign interference in the 2020 elections is predicted by the intelligence community, giving an increasingly hostile nation access to private data could be disastrous. The more information would-be meddlers have, the more influence they can achieve.

A majority of voters within both parties predict that future elections will be subject to tampering, but only 53% of Americans believe that the country is well-prepared for a major cyber-attack. The interim rule represents one step towards securing America’s technological infrastructure by limiting Huawei’s potentially dangerous integration.

The rule also helps the country to avoid a disastrous financial cost in the future. Even if Huawei’s products are price-competitive, integrating the company’s equipment today would result in an even higher cost to eventually remove it.

Rural wireless providers, for example, suggest that it could cost up to $1 billion to remove their potentially-compromised Huawei components. Gutting the federal government of its high-risk Chinese equipment would inflict an enormous cost on the public, particularly to undo a preventable problem.

As long as Beijing is able to call the shots, Huawei poses an outsized menace to American national security, businesses, and consumers. If governments around the world are clamping down on the threat that Huawei poses, it’s high time that Washington do the same when the public’s interests are at risk.

Oliver McPherson-Smith writes for the American Consumer Institute. He wrote this for InsideSources.com.