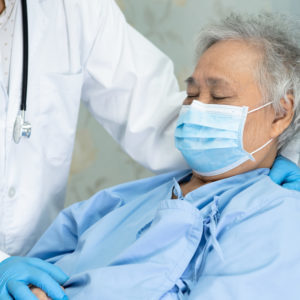 From COVID to Lymphoma: Federal Interference Is Hurting Patient Care

One of the treatments the president received is an experimental “antibody cocktail” from pharmaceutical company Regeneron. The drug is designed to provide specific infection-fighting proteins, called antibodies that bind with the virus making it inactive. Preliminary trials appear to have been successful, and Regeneron is preparing for a larger-scale study to confirm the results.

The medical experts at Walter Reed seemed confident enough to treat the president with this drug even though the Food and Drug Administration (FDA) hadn’t approved it for the general public.

This raises the question: If it’s good enough for the president, why not for every other American? There’s no evidence to suggest that Trump was so ill that using the experimental drug was a last-ditch, high-risk judgment call.

On the contrary, it looks like the president went through a routine quarantine, treatment and recovery. So why is the drug off-limits to the rest of us?

Regulatory agencies like the FDA have important roles to play in thoroughly testing medications before thousands or millions of people use them.

However, the FDA frequently puts unnecessary bureaucratic roadblocks in the way of proven treatments, and the Regeneron drug isn’t the only one getting held up.

Right now, the FDA says the coronavirus pandemic is delaying the approval process, but the agency has been slow for a long time.

Part of the reason for the FDA’s lengthy process and lack of initiative is that there are so few political consequences for inaction.

As described in a 2010 Journal of American Physicians and Surgeons paper, lawmakers and the public get justifiably angry if an untested drug hurts patients, but relatively few people think of the patients who will suffer or die because a life-saving medication is delayed for a year — or longer.

One medication that’s currently stuck in regulatory limbo is the lymphoma drug Liso-cel. Non-Hodgkin lymphoma is a type of blood cancer that will likely affect more than 70,000 Americans and kill nearly 20,000 this year. Despite this, the FDA continues to delay inspections of manufacturing facilities for the drug, citing pandemic-related travel difficulties for its personnel.

If Liso-cel developer Bristol-Myers Squibb doesn’t get approval by November 16, they’ll have to re-submit their application — even though nothing has changed — and wait at least another year to make the treatment available to patients.

Increased strain on regulatory agencies due to COVID-19 is understandable up to a point. But the FDA needs to review its guidelines and adapt instead of being stuck in the past.

Now and after the pandemic ends, the agency has to move towards its proper role of overseeing private-sector innovation, not bringing it to a halt over technicalities like expired paperwork.

A written approval with an arbitrary expiration date would be absurd enough if thousands of lives weren’t on the line. In this case, the pointless red tape may have deadly consequences.

In the short term, the FDA needs to be cautious but assertive, fast-tracking approval for effective COVID-19 treatments. If these medications are good enough for the most powerful man in the world, they should be available to ordinary Americans as well.

In the long term, the agency needs to review its approval process and make it more efficient without compromising safety standards. It is past time for the agency to look at using surrogate end points to prove efficacy, saving time and money.

Dr. Kenneth A. Fisher is the author of “Understanding Healthcare: A Historical Perspective.” He wrote this for InsideSources.com.