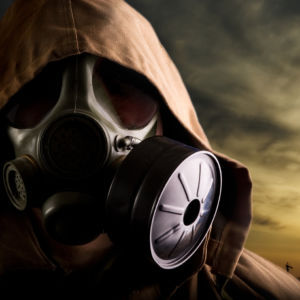 Global Pollution Is the World’s Biggest Killer But the U.S. Is Better Off Than Most, Study Finds

Like most countries in the developed world, pollution is much less of a concern in the United States compared to lower and middle income countries around the world, according to a landmark study on air, water, soils and workplaces.

One key point the study makes however is that air pollution disperses and moves globally. Thus airborne pollutants travel across borders, continents, and oceans — pollution in one country can significantly impact another country half way around the world.

The research published in The Lancet medical journal on Thursday found from an analysis of emissions from Chinese export manufacturers on days with strong westerly winds (winds blowing from China across the Pacific), a significant portion of sulphate concentrations, carbon monoxide, and black carbon pollution was detected in the western part of the United States.

The study’s data showed that the Unites States was found to have one of the lowest proportions of death attributable to pollution, 5.74 per cent in 2015, which puts it 12th best in the world in a study that compared almost 200 different countries. Canada, New Zealand, Sweden, Finland and The Bahamas were among the countries that fared better than the U.S.

The scientists who led the study, Dr. Philip Landrigan and Richard Fuller, told Inside Sources that the pollution deaths per 100,000 population was the best metric to use when comparing countries within their study.

The study suggests that approximately 9 million people — one out of every six deaths in 2015 — was linked to pollution. The study also found that more people around the world are killed every year from pollution than hunger, natural disasters, war, smoking, and many other diseases combined.

Most of the deaths from pollution were found to have been attributed to non-communicable diseases such as lung cancer, stroke, and heart disease.

The vast majority of pollution deaths occurred in poorer nations, like Bangladesh, India, Somalia, and Chad, where pollution caused at least a quarter of all deaths.

However, even a wealthy nation like the United States still has much room for improvement, the research highlighted, especially since not all forms of pollution related deaths were accounted for in this study.

“It’s important to note that there are deaths in the U.S. from pollution and most of them are coming from air pollution. Also a vast majority of chemicals impacting people in the U.S. have not been studied yet, so there’s probably a lot more deaths from pollution from chemicals and heavy metals in the U.S. that we haven’t evaluated yet,” Richard Fuller, co-chair of The Lancet Commission on Pollution and Health, told Inside Sources in an interview.

The Lancet Commission on Pollution and Health

The study highlights a few of the significant pollution problems facing the United States currently. The paper states that there is a disproportionately high occurrence of asthma and other respiratory diseases among children in minority, mostly-disadvantaged neighborhoods in the U.S.

The study calls attention to the “Cancer Alley” region of Louisiana, “an 85 mile stretch along the Mississippi River where 125 companies manufacture a quarter of all petrochemical products made in North America,” where it’s been determined that the African-American community is economically disadvantaged and disproportionately affected by pollution from hazardous facilities.

Another case study the Lancet Commission mentions is of the alleged exploitative uranium mining operations on Native American (Navajo) lands. The commission says that mining operations on Navajo lands “depleted and contaminated the scarce water supply and produced high prevalence of lung cancer in Navajo underground miners, who suffered intense occupational exposures to radon (a radioactive gas that is a leading cause of lung cancer).”

A final example the study cites involves what it calls “the disproportionate exposures of Hispanic farm workers to acutely toxic organophosphate pesticides, such as parathion.” The Lancet pollution paper says that several cases of acute pesticide poisoning have resulted; however, since the poisoning has occurred mostly among Hispanic workers who are undocumented immigrants, they are afraid to protest environmental injustice and pollution issues.

“The United States is doing okay, not perfect, but okay, and anything that reduces the controls around pollution would be a big mistake. We’ve seen a whole bunch of regulatory dismantling from the federal government recently, which has benefited industries more than everyday people. The administration right now is not considering the people as much as it should. I’m not a big fan of Mr.Pruitt (the current head of the EPA who President Trump appointed),” Fuller said. 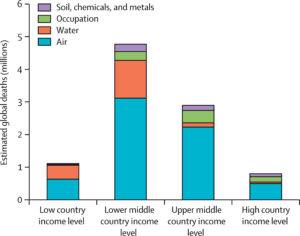 The Lancet Commission on Pollution and Health

The study did however also cite various examples of the United States making vast leaps to improve the state of pollution within the country in the past few decades.

Since 1970, the Lancet paper said there had been an aggregate benefit of $1.5 trillion against an investment of $65 billion in air pollution control in the U.S., meaning an estimated $30 in benefits (range, $4–88) has been returned to the economy for every dollar spent.

The concentrations of six common air pollutants have been reduced by about 70 percent since the passage of the Clean Air Act in 1970, the study states and in the same time period, the GDP has increased by nearly 250 percent.

Similarly, the study states that the removal of lead from gasoline has resulted in an estimated $200 billion (range, $110 billion–300 billion) benefit to the U.S. economy each year since 1980. This has resulted in an aggregate benefit thus far of over $6 trillion through “the increased cognitive function and enhanced economic productivity of generations of children exposed since birth to only low amounts of lead (instead of the high amounts of lead children were previously exposed to).”

Nihal Krishan is a reporter for InsideSources.com.