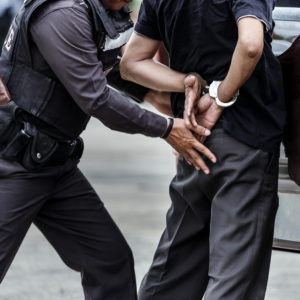 Is Changing Police Just About Them, or Is It Also About Us?

Since the 2014 Ferguson Uprising lit up smartphones and televisions across the country, there has been an expanding movement to curb the disproportionate killings of people of color at the hands of police officers. People protested, marched and filled city halls in throughout the country, calling for change. Too often those calls for change were met with more of the same: law enforcement and white people dismissing generational claims of systemic and cultural injustice lamenting throughout communities of color.

This past month, in California, Governor Gavin Newsom signed into law the California Act to Save Lives — more affectionately known in circles that have been resisting state violence as the “Stephon Clark Bill.” In March 2018 in Sacramento, California, Stephon Clark was killed in his grandmother’s backyard by a police officer. The officers who killed him said Clark was holding a gun; only a cellphone was near his pierced body.

The California Act to Save Lives increases the standard before police officers use lethal force, making it the strongest “use of force” policy in the country. So, what’s next?

For the last three years, community members have done more than protest. Faith-based organizing networks, such as PICO California, have facilitated hundreds of meetings inviting law enforcement to the table. These meetings build relationships between law enforcement and local communities while also seeking to bridge differences as a means of creating community and belonging. Impacted families, having lost loved ones at the hands of police, attended the California Department of Justice Racial and Identity Profiling Board’s public meetings, urging change after passing a 2015 law to end racial profiling in California. Longtime activists flooded the streets across the state as a response to unlawful police killings while also demanding justice.

Such practices required faith and grassroots leaders to fill and embody space for people subjected to police brutality. These same community leaders working to stop police killings are also participating in community organizing initiatives that seek to reduce gun violence and end mass incarceration. There is a thread woven through their work that America to which must pay attention.

It is these threads of peacemaking practices that cultivate a fabric of shared identity. These disparate groups transcend racial, ideological and class lines fashioning a reimagined tapestry of belonging. These practices need to continue to ensure they’re transforming policing standards aroundhiring, equipment, accountability and training but also must look deeper into the spiritual dilemma at the root of the policing issue.

In moments of fear and uncertainty, so called “progressives” call armed strangers into our neighborhoods because we have lost our connection to one another across differences. It is hoped these armed strangers will non-violently disarm most conflicts nonviolently.

In her new book, “Biased,” Jennifer Eberhardt writes, “Implicit bias is not a new way of calling someone a racist. In fact, you don’t have to be a racist at all to be influenced by it. Implicit bias is a kind of distorting lens that’s a product of both the architecture of our brain and the disparities in our society.”

Our biases help us believe that our only option in contexts where one believes the best option in moments of responding well to perceived danger is to call an armed stranger to protect us, oftentimes from people we know. And while stricter policing policies have been passed to curb the horrors of violence at the hands of law enforcement, one must also explore how they are to confront the biases that too often shape one’s perceptions of the “other.”

Whether it’s a black family grilling at Lake Merritt in Oakland or a black millennial waiting outside a San Francisco building for friends,progressive white people continue to call the police on “suspicious” black people in the so-called progressive base of the country.

As we go forward, we are called to transform the public safety system into one worthy of the people’s trust. As this is done, we need to usher in the words of Dr. Martin Luther King Jr., where “a radical revolution of values” stops seeing violence as the only pathway to peace; instead we see mercy as the foundational tool for building the world we want to inhabit.

In policing, we need to focus on hiring, questioning the rubric that determines who is hired as a police officer in our cities. We need to abandon the Type A, former military personalities and hire more college graduates who have spent time studying human behavior and practicing anti-racist theory. Greater attention needs to be aimed at equipment, demilitarizing our police departments, ridding them of the weapons of war and ensuring that all police officers are equipped with mandatory body cameras that remain recording through their shift.

We need to focus on accountability, ensuring that investigations of police killings are independent of the judicial systems, breaking the unholy alliance between district attorneys and police unions. And we need to focus on training, ensuring that recruits have more preparation than an electrician does before patrolling our streets, armed with weapons. We must ensure they are consistently being trained around implicit bias, procedural justice and cultural competency, with evaluations that ensure what individuals are learning is, in fact, embodied in their daily encounters.

We should all be aspiring abolitionists, because all life has value, and we must unleash the kind of imagination that restores the sick and hurting among us rather than caging and executing them on our streets. And on our way to that future, we must transform the systems we have to become more rooted in belonging.

Eberhardt writes, “Living with diversity means getting comfortable with people who might not always think like you, people who don’t have the same experience or perspectives. That process can be challenging. But it might also be an opportunity to expand your horizons and examine your own buried bias.”

In a candid conversation, a police executive in the California Bay Area explained that in policing, “culture eats policy for breakfast.” Now that we have passed the Stephon Clark bill, we must work for more structural and cultural change, making it possible for everyone to live free from violence.

It is our duty to fight for our freedom.

The Rev. Ben McBride is co-director of PICO California, a faith-based, community-organizing network. He wrote this for InsideSources.com.