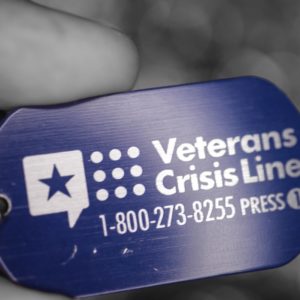 The top clinical priority at the Department of Veterans Affairs is reducing veteran suicide.

But here is the stark truth: Suicide has been on the rise in America for nearly two decades now. This wave is crashing upon men and women of all ages, and even schoolchildren.

There’s no single factor that predicts suicide. Many cite opioid abuse, alcohol and mental health as potential warning signs. Homelessness seems to be a factor, and some even believe that heavy use of social media might be playing a role.

Whatever the causes, our nationwide suicide rate is as high now as it was in the early 1940s. Back then, as we were entering World War II, the rate was falling from a high it hit during the Great Depression.

Today, the rate is climbing, and has been since the turn of the century. This poses a challenge that we must find a way to meet.

No one has a monopoly on advice and expertise on how to reverse this trend. But I believe VA has some important insight into the problem since veterans have faced it for so long, and VA has been striving for years not only to prevent suicide but also to identify and mitigate the risks before that last tragic act is taken.

Clinical responses are a big part of the VA’s approach to this tragedy. We now provide mental health screening for all veterans who seek care from us, and we are watching several thousand veterans on any given day who are deemed to pose a risk to themselves. Our crisis call network responds to nearly 1,800 calls a day on average, and facilitates care for 350 to 400 veterans each day. (Veterans who need immediate help should call 1-800-273-8255 and press 1, or text 838255.)

We are also working with the Defense Department to ensure service members who are transitioning to VA care have access to mental health services and find new ways to deliver care to veterans in rural areas of the country that aren’t serviced by a nearby VA medical center.

But most veterans in crisis aren’t under VA care, which means communities and local institutions also have a major role to play. When we talk about longer-term solutions at VA, we talk about collaboration and partnership with state and local groups, and we talk about families and friendship. In other words, we talk about positive factors outside the VA that can help prevent people from sinking so low they can’t see any way out.

President Trump this year took a bold step toward connecting people who can work together to stop veteran suicide. His President’s Roadmap to Empower Veterans and End a National Tragedy of Suicide executive order calls for a nationwide public-health strategy to reduce the rate at which we’re losing our veterans.

A big part of the job will be finding ways to get non-profit groups, companies, activists, faith-based groups and government at all levels working together to identify at-risk veterans and get them the help they need. That kind of cooperation has already helped us lower the incidence of veteran homelessness around the country.

The president wisely determined that it would take more than just the federal government to curb veteran suicide. He dubbed the PREVENTS initiative a “national call to action,” and the goal is to create new partnerships that actively engage with veterans instead of waiting for veterans to ask for help.

This same roadmap can be used to help non-veterans as well, and it’s my hope that during this Suicide Prevention Month we can all look for ways to contribute.

Each one of us, for example, can play a role in defeating the stigma that for too long has kept us from talking about mental health with our loved ones. We can no longer afford to lose members of our family or our friends and neighbors because we quietly declined to reach out to them.

Everyone has two important things to offer to those who need our help: time and companionship. Let us all find time this month — and in the months ahead — to connect with those around us and talk about the value of life.