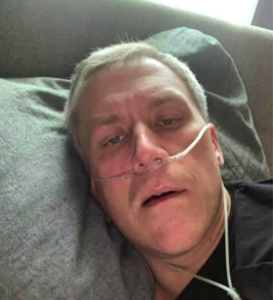 NBC News Contributor Never Had COVID, Network Has Yet To Issue Correction

A frightening NBC News report that a medical contributor caught COVID-19 through his eyes while simply sitting on an airplane has been debunked by multiple tests results. Unfortunately, the network has yet to correct the story.

In May, NBC medical contributor Joseph Fair, a self-styled “virus hunter,” told the Today Show about his experience with the virus. “If it can take me down, it can take down anybody,” he said.

According to Fair, he caught the virus on a commercial flight out of New Orleans. “I had a mask on, I had gloves on, I did my normal wipes routine… but obviously, you can still get it through your eyes,” Fair told the Today Show from his hospital bed. “And, of course, I wasn’t wearing goggles on the flight.”

A month later, Fair repeated his tale to NBC’s Chuck Todd on Meet The Press, calling the illness “the worst I’ve ever felt. I probably spent 23 out of 24 hours in bed.”

“I don’t have any of those underlying conditions, I’m 42 years old. So you wouldn’t think, clinically, that I would be one of those people that would get so very ill,” Fair said, adding: “Those people that are young and think they’re invincible or people that just don’t think it’s going to affect them that greatly even if they do get it. I can say that my own experience was the complete opposite.”

What Fair, Todd and NBC News didn’t tell the audience is that before he made this claim, Fair had already tested negative for COVID-19 at least five times. Fair followed that up with an antibody test to detect if he’d ever had the virus. The results were negative.

But it wasn’t until July 7, nearly two months after his initial appearance, that both Fair and NBC revealed the results of his antibody test. Fair now claims his illness “remains an undiagnosed mystery.”

Not only was Fair’s suggestion that he caught the virus through his eyes pure speculation (and in the view of some medical professionals, irresponsible to boot), but his COVID infection has been repeatedly debunked. And still NBC News has yet to take the incorrect report of his “coronavirus infection” off their website.

“In articles and TV segments, millions of NBC readers and viewers are today left with the impression that Dr. Joseph Fair…came down with a case of COVID-19 through his eyes that was so severe he was hospitalized in ICU for several days and that at least five ‘false negative’ tests couldn’t trace it,” media watchdog Steve Krakauer writes in his Fourth Watch newsletter.

“This pandemic is scary enough without this false storyline introduced into the news picture.”

While it is critical that the public be kept informed about the facts surrounding the novel coronavirus, this type of misinformation being spread by a medical journalist doesn’t help the public trust and only adds fuel to the fire from those who argue the media is inciting panic and hysteria.

It will be interesting to see if NBC continues its relationship with Dr. Fair given his misleading comments about his own illness. Observers will recall that the Peacock Network showed then-medical expert Dr. Nancy Snyderman the door in 2015 when she violated the conditions of an Ebola-related self-quarantine that called into question her credibility as a medical journalist.

As of this writing, Fair continues to be a medical contributor for NBC News.