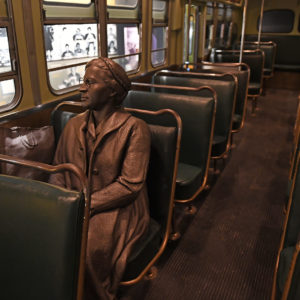 Transit equity isn’t just about where you sit on the bus. It’s about whether you can get on a bus at all.

Nearly two-thirds of a century ago, an African American seamstress and activist named Rosa Parks broke the law by refusing to give up her seat to a white rider on an bus in the segregated South. She was arrested and locked up in the Montgomery, Alabama jail.

In response, the black community of Montgomery boycotted the city’s buses until they could ride with dignity. The boycott lasted 381 days, until the United States Supreme Court ruled that such discrimination was unconstitutional.

One of the organizers of the Montgomery bus boycott, the Rev. Martin Luther King, Jr., became America’s best-known spokesperson for civil rights. He helped Americans understand that civil rights included not only the rights to vote and sit up front on the bus, but the right to a decent home, the right to a good job, the right to join a union, and other rights necessary for equal access to a good life.

King recognized that equal access to transportation was one of those essential rights.

“The layout of rapid-transit systems,” he pointed out, “determines the accessibility of jobs.” Poorer people needed access to those jobs so they could begin to “move into the mainstream of American life” — which meant they needed transit.

Since then our urban transit systems have grown far worse. Privatization has led to running companies not for public service, but for corporate profit.

If companies can’t make a profit running buses for less affluent workers and neighborhoods, they often fail to buy new buses, let their equipment run down, make schedules that are impossible for drivers to meet — and then shut down the lines on the grounds that they don’t pay for themselves!

Our cities are full of transit deserts, where residents and workers have to spend hours walking and taking circuitous routes simply to get to their jobs, see their families, buy groceries, or get to a medical appointment. According to U.S. Census data, nearly half of American households don’t have access to any public transportation.

In honor of Rosa Parks Day, a group of organizations — including the Amalgamated Transit Union, the Labor Network for Sustainability, Jobs with Justice, and the Institute for Policy Studies — are declaring a Transit Equity Day on February 5 to take action for civil rights and a climate safe future.

We think every person in every neighborhood regardless of age, race, class, gender, or disability should have the right to safe, convenient transportation at an affordable cost.

We think the workers who build, operate, and maintain those systems have the right to safe, decent working conditions, family-supporting incomes, and the right to choose to be represented by a union.

Moreover, cars, trucks, and other vehicles emit a large proportion of our dangerous pollution, causing asthma and many other life-threatening conditions. We argue that replacing cars and trucks with public transit is far healthier for individuals and communities.

The lives and futures of Americans — and all people — are threatened by devastating climate change. As a U.S. federal court recently declared, all people have a right to a stable climate.

That will require a rapid cut in the burning of the fossil fuels that emit the greenhouse gases (GHGs) that cause climate change. And one of the easiest, fastest, and cheapest ways to do that is public transit run on clean, renewable energy.

Transit justice, in short, is essential for building a just and climate-safe future.

Jeremy Brecher is an activist and author of more than a dozen books on labor and social movements. He worked with the Institute for Policy Studies to distribute this piece on Transit Equity Day.