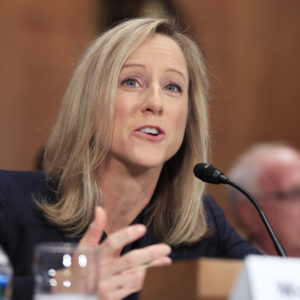 Kathleen Kraninger, President Donald Trump's nominee to be the director of the Bureau of Consumer Financial Protection, testifies before a Senate Banking Committee hearing on her confirmation on Capitol Hill in Washington, Thursday, July 19, 2018. (AP Photo/Manuel Balce Ceneta)
[IS] Opinions

Kathy Kraninger recently began serving her five-year term as director of the Consumer Financial Protection Bureau. Much like her predecessor Mick Mulvaney, Kraninger will undoubtedly continue to rein in the bureau’s out-of-control regulations and implement free-market reforms.

Since the CFPB’s inception in 2011 up until Mulvaney’s tenure as acting director, the bureau continued to implement policies that unfairly targeted the financial sector. These “reforms” that were meant to protect consumers from Wall Street’s greedy CEO’s and Big Banks merely hurt thousands of typical Americans by making it more difficult for them to access affordable credit and loans.

Now with a new director, it’s safe to assume that many of Mulvaney’s free-market reforms will continue to be spearheaded throughout the bureau.

During Kraninger’s testimony before the Senate Banking Committee in July, she claimed that she is against the bureau’s prior “regulation by enforcement” and wants to ensure that any future rulemaking will be “fair and transparent” while using “robust use of cost-benefit analysis.” Both policies were absent prior to Mulvaney’s leadership.

Kraninger has a strong history of overseeing operations at a government agency. She comes from the Office of Management and Budget, where she oversaw the budget for financial regulations. During her tenure at the OMB, Kraninger successfully cut the CFPB’s budget and restricted its enforcement powers.

Take the bureau’s prior regulation by enforcement mentality: Kraninger should continue to change the focus from implementing across-the-board policies to enforcing regulations that are transparent and are created during a clear rulemaking process.

Kraninger should also continue to reform the CFPB from within. The bureau has been plagued with scandals recently from racist blog posts by former employees to staff who’ve been accused of sexual harassment. In addition to overhauling the bureau’s lagging office standards, Kraninger should also continue with Mulvaney’s reforms to reduce the number of bureaucratic staff and consolidate offices with redundant purposes.

New Year’s usually means new resolutions. For new CFPB director Kathy Kraninger, these resolutions should come in the form of a reformed bureau. Kraninger may have her work cut out for her, but she has the chance to initiate change throughout an agency that has previously been known for its counter-productive regulations and endless red tape.