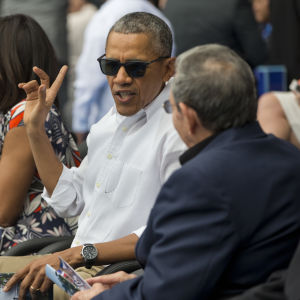 The more you know about Cuba’s sorrows and who caused them, the less hopeful you will be that any good will come from a “transition” in April being managed by the Castro clan. However, there is real hope for 11 million Cubans if Castro’s survival plan crumbles — as the regime loses the windfalls it expected from President Obama’s ill-conceived “economic opening” and from its parasitic relationship with Venezuela.

Obama scrapped the reasonable human rights and democracy standards that are U.S. law to grant unilaterally the Castro regime diplomatic recognition and to boost trade and tourism. That policy ignored the fact that the Castros dictate the terms of engagement — if you do business on the island, your partner is the regime, not the people.

Soon after Obama’s photo-op in Havana, it became clear the only business deals to be had in the anemic Cuban economy were with GAESA — a state-owned firm created to channel cash to the military that is managed by Raul Castro’s son-in-law, Gen. Luis Alberto Rodriguez Lopez-Callejas. GAESA controls about 80 percent of the Cuban economy. Its tourism branch, GAVIOTA, operates 40 percent of all the island’s hotels and 60 percent of its high-end lodging.

Obama’s shortsighted concessions represented a boon not merely to the regime but directly to the Castro family. Far from making a democratic transition more likely, these sweetheart deals buoyed the Castros’ hopes for a dynastic succession.

However, in June, President Trump blocked those benefits by forbidding transactions with GAESA, in his first step toward reversing the counterproductive Obama measures. Once Trump empowers his own team in the State Department, this continuing policy review may lead to breaking diplomatic relations. After all, under Obama’s strategy, U.S. diplomats assigned to the reopened embassy in Havana practically abandoned the courageous cadre of Castro critics. Today, only a few U.S. diplomats remain in Havana after suspicious “health attacks” did physical damage to two-dozen Americans — likely with the complicity of the regime.

The second unsteady pillar of Castro’s survival strategy is looting Venezuela. The Castro brothers backed the revolutionary Hugo Chavez and engineered the succession of power to Nicolas Maduro in 2013 to ensure the flow of cash and free oil to Cuba.

Thousands of Cubans are part of Maduro’s ruthless internal security force. And, senior Cuban military officers — including Castro’s favorite general Lopez-Callejas — play an integral role in the corrupt regime that has pillaged billions in Venezuelan oil revenue and that profits from cocaine trafficking.

Today, Venezuela’s economy has collapsed, and hunger, violence and repression torment its people. What many observers do not realize is that this tragedy is man-made — straight out of Castro’s playbook. By decimating the private sector, domestic production and food imports, Venezuelans are rendered dependent on the regime or too distracted to resist.

Here, too, the Trump administration is cracking down. Since February 2017, the Treasury Department has levied financial sanctions on Maduro, his vice president and key cronies for their involvement in drug trafficking, terrorism, corruption or repression. Mexico, Colombia, Canada and, recently, the European Union have adopted similar measures to undermine the corrupt regime. A regional diplomatic effort led by South American countries recently rejected a scheme by Maduro to keep power by staging phony elections. Clearly, ending the illegal regime in Caracas will be a fatal blow to the bankrupt dictatorship in Havana.

On April 19, Raul Castro will stage his own political transition, passing the presidency to handpicked successor Miguel Mario Diaz-Canel — whose own hardline views offer no hope for meaningful reform. Indeed, Castro is expected to retain the leadership of the powerful Communist Party and intends to claim a seat in the National Assembly.

The aging dictator has ensured that the security apparatus will remain in the hands of his son, Alejandro Castro Espin, and that management of the country’s economy will stay in the family.

However, these best-laid plans may be undone by the reversal of the Obama economic concessions and the disintegration of the Maduro regime in Venezuela.

In addition to economic sanctions, the Trump administration should adopt innovative programs to communicate with the Cuban people and to help the country’s independent political activists prepare for an orderly transition to self-government. At long last, we must reject the illusion that the Castros have any right to hold power or any interest in reforming Cuba.

Roger F. Noriega was U.S. ambassador to the OAS and assistant secretary of state for Western Hemisphere Affairs from 2001 to 2005. He is a visiting fellow at the American Enterprise Institute.