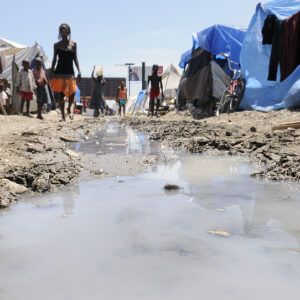 Thousands of Haitian people have been flooding the U.S. borders, making headlines in recent days. These headlines have called attention to harrowing scenes at the border, but they seldom mention the scenes that people are fleeing. As an international aid worker, I’ve spent several weeks in Haiti this year – including in response to the recent August earthquake – and based on what I saw, I can say definitively: there is a reason why people are leaving.

Haiti is the poorest country in the Western Hemisphere, with the average person earning about $100 per month, but why? The price of “freedom”. With the country’s plantations and infrastructure all but destroyed in the revolution, Haiti was also required to pay reparations to France in exchange for diplomatic recognition: 150 million gold francs, which France later reduced to 90 million (the equivalent today to nearly $20 billion).

Haiti paid these reparations to France from 1825 to 1947, taking out high-interest loans from American, German, and French banks to cover the cost (approximately 80 percent of its national budget each year). This cycle of debt put Haiti in a vulnerable context with regards to politics and leadership and left everyday Haitians shouldering much of the financial burdens, passing on poverty from one generation to the next.

It’s difficult to think about Haiti without recalling the devastating 2010 earthquake that flooded the country with journalists, humanitarian workers, and international aid funding. Despite the attention, the money, and the 11 years that have passed since the earthquake, the country still has not recovered – to this day, there are people in the capital Port-au-Prince who are sleeping in tents and living in slums that developed after the quake.

While the earthquake alone would be enough to send people packing in search of a better life, this was only the beginning of what has been an incredibly difficult decade for the Haitian people. Six years after the earthquake, Haiti was hit hard by Hurricane Matthew in 2016, which resulted in 546 deaths and $1.9 million in damages.

In 2019, intense gang violence led to a series of peyi-loc, or country-wide lockdowns, that kept people indoors as gangs restricted movements through roadblocks made of flaming tires and rocks. This was a violent form of political protest by the party opposing the president, which kept people from working and children out of school for weeks.

In 2020, the global COVID-19 pandemic began, and although official case numbers remain relatively low in Haiti, the economic fallout – rising prices, job loss, and drops in imports – have left people with little recourse when they were already struggling to make ends meet.

All these events are underpinned by years of political instability and violence culminating in the assassination of President Jovenel Moïse in July this year. And just when the situation seemed like it couldn’t be worse, a 7.2 magnitude earthquake struck the southern peninsula in August, killing over 2,000 people and leaving over half the population of the area in need of humanitarian assistance.

I spent a lot of my time in Haiti listening to people’s stories – about the earthquakes, about the political situation, about their dreams of peace for their country. After the August earthquake, I sat on a broken mattress outside a crumbled home and listened to the woman who lived there tell me how hopeless she felt. “I have no hope, no hope at all of rebuilding. I sell peanuts for a living; how could I afford to rebuild a home?”

There was a youth activist who spoke about his views on the political situation. He told me “I am sure that the key to peace in Haiti lies in the young people of this country, but we can’t have peace if we cannot work and buy food to eat.”

Then a colleague, who perhaps put it best when she said, “We Haitians are resilient, but I wish we didn’t always have to be.” Resilience is not an inexhaustible resource. After all, that’s happened in Haiti’s history, let alone the past decade, it’s no wonder that people in Haiti are looking elsewhere for safety and stability. As reporting on recent migration continues and immigration policy debates rage on, it’s important to remember that nobody leaves their home for no reason.

Makayla Palazzo is a Policy & Advocacy Officer at Concern Worldwide US, a global humanitarian organization focused on the world’s most vulnerable. She wrote this for InsideSources.com.