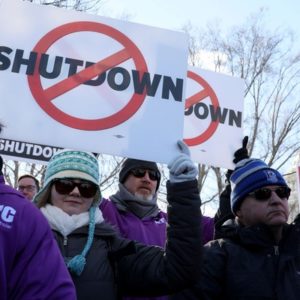 The Shutdown Made Inequality Worse

Anyone who has experienced joblessness or poverty can attest to the fear and anxiety associated with not having the money to cover the bills. During the government shutdown, stories flooded the media from struggling federal workers forced to stay home or work without pay.

But the shutdown didn’t occur in a vacuum. One unpleasant reality is that how these workers fared may have depended more on the color of their skin than you might think.

Many of these families don’t have savings or other wealth to fall back on, and their stories are gut wrenching.

“I don’t have cash reserves and I’m barely staying above water,” said Lora Williams, an African-American woman and 26-year-veteran of the National Parks Service. “My mother tells me — bless her heart — there’s a bed here if you need it,” Williams continued. “I’m 50. I’m not going back to my parents’ house.”

She resorted to opening a GoFundMe to try to make ends meet.

Wealth, the sum total of what you own minus what you owe, is the buffer families rely on when uncertainty strikes. It’s the difference between short-term unemployment being a time to simply “tighten the belt” versus homelessness and financial ruin.

Wealth is heavily skewed in the United States, largely along racial lines. My colleagues and I looked at that divide in a new report for the Institute for Policy Studies.

Put simply, it’s not surprising that black and Latino federal workers affected by the shutdown don’t have a wealth cushion to fall back on. And considering the high percentage of black federal workers, the government shutdown has only made this worse.

That isn’t to say white families are all flush with cash. Millions of white families struggle in poverty and are comparably low-wealth. Yet if you look at the numbers, you’ll see there is a gaping disparity along racial lines.

Our data stretches back three decades. Since 1983, median black family wealth has declined by more than half. Median white family wealth, on the other hand, has jumped by a third. So, the gap is getting bigger.

Over the past 30 years, the number of households with $10 million or more skyrocketed by 856 percent, and the richest 0.1 percent have seen their wealth jump 133 percent. Meanwhile, the median American family saw their wealth drop 3 percent.

The deep and growing racial wealth divide was built on a history of intentional public policy — from slavery and Jim Crow to redlining, mass incarceration, unfair public-school funding formulas, and many other policies.

As many scholars have shown, it’s not the result of collective laziness or bad decision making by poor people. It’s systemic, and thus requires systemic solutions.

If there’s a silver lining to the recently concluded shutdown, it’s that it can shine a light on the deep wealth inequality in the United States. If the savings of long-tenured federal employees can’t cover a few missed paychecks, where does that leave the millions of families who can’t expect back pay or other relief?

Enacting policies that enable low-wealth families to buffer rainy days and build a nest egg for a brighter future should be a top priority for the new Congress. In the wealthiest country in the world, and one whose founding documents claimed all people were created equal, no one should be one missed paycheck away from financial devastation.