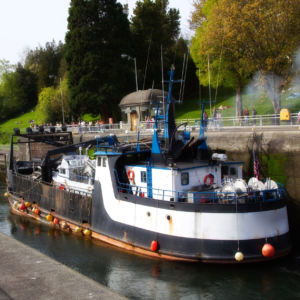 From Toll Roads to Toll Rivers

Much of the news coverage stemming from the White House’s recent “infrastructure week,” an effort to push for a $1 trillion infrastructure package, focused on hot-button topics like pipelines and environmental permitting. But President Donald Trump deserves accolades for highlighting a lesser known issue: the deteriorating state of locks and dams along the nation’s inland waterways.

While the president correctly diagnosed what ails our waters, precise details about how he would fix the problem remain scarce. The president should directly embrace the obvious solution: it’s time to institute “toll rivers.”

In general, the White House is clear that it envisions private money playing a fairly significant role in paying for its proposed infrastructure upgrades. It also has already supported some privatization models, notably one for our nation’s air traffic control system. When it comes to inland waterways, the administration has even floated the idea in its proposed 2018 budget of “establishing a fee to increase the amount paid by commercial navigation users of inland waterways.”

The commercial shipping industry interpreted that fee proposal to mean the administration is in favor of river tolls, which shippers are strongly against. Perhaps because of this pushback, the administration has been cautious about tipping its hand as to exactly what kinds of user fees it envisions. The White House likewise has avoided explicitly calling for privatizing water infrastructure assets.

This hesitancy is unwarranted. Privatizing locks and allowing user fees is by far the best option available to upgrade our waterways.

The 192 locks along the nation’s inland waterways are maintained and operated by the U.S. Army Corps of Engineers. These locks, most of which were built in the 1930s, are literally falling apart. While the corps estimates it would need at least an additional $13 billion to bring them up to snuff, Trump — like Barack Obama before him — has proposed significant cuts to the corps’ budget.

Privatization and user fees could break this longstanding logjam. Under such a system, private owners could purchase locks and other water infrastructure assets. This would leave them responsible for upgrades and able to charge ships that transgress the locks modest user fees to recoup their cost of investment. Rather than a scary idea, as some opponents portray privatization to be, these type of “river tolls” would operate in much the same way as private toll roads, an idea that has gained widespread acceptance around the world.

If private locks ultimately are deemed a political nonstarter, other options include long-term leases or authorizing the corps itself to charge river tolls. It would make economic sense for those who benefit most from an asset to be tasked with funding it. Boaters and shippers are clearly the main beneficiaries of locks, which help ensure smoother, easier-to-navigate rivers. But under current law only 50 percent of the construction costs for new locks and dams come from the Inland Waterways Trust Fund, which is funded by a 29 cent per-gallon inland waterways fuel tax. The other half for new construction comes from federal taxpayers, who also must shell out for the continuing maintenance of our nation’s locks.

Because most American taxpayers derive no special benefits from these water infrastructure assets, it is unreasonable to expect them to pick up the tab to maintain and upgrade them. That’s why it would be fair to charge fees for transgressing a lock to both commercial and recreational river users, the latter of whom thus far appear to be exempt from any White House plans. After all, both barges and kayakers are direct beneficiaries of a better river experience.

Like privatization itself, charging user fees on federal land and water is neither a radical nor new idea. Americans across the country are used to paying user fees for myriad activities within the national parks, from camping to fishing to even entering through the park’s gates. In fact, most Americans support the use of such fees and recognize that they are a helpful component of maintaining our national parks system.

Time is running out to fix many key locks and dams across the country. If President Trump truly is committed to fixing our nation’s waterways and establishing a durable funding system for our locks and dams, he should push Congress to pass legislation allowing some combination of privatization and user fees.