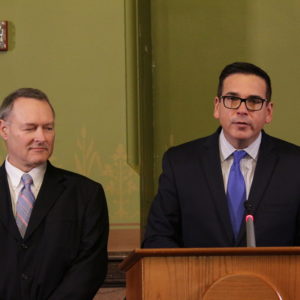 “Given how Republicans have been governing,” McCoy said in an issued press release, “every Iowan affected directly or indirectly by IPERS will be holding their breath until the 2018 session adjourns.”

In a bill authored and introduced last session — Senate File 45 — by Sen. Brad Zaun (R-District 21), nearly all public employees hired after July 1, 2019 would not be eligible to pay into and receive IPERS. According to the draft legislation, the only police and fire employees that would be eligible to participate in a “retirement system” are those that are employed by a city with less than 8,000 people before the federal census of the year 1990.

The legislation also states that all public employee sectors of the state must conduct an investigation and compile a subsequent report that would create an alternative defined-contribution retirement system, all of which would be due by October 1, 2018.

“They have a history of saying ‘we’re going to tweak collective bargaining,’” McCoy said, “and have a bill that absolutely guts collective bargaining. And so trust is a two way street. Let me tell you, instead of a two-way street in the Iowa House and Senate — where I’ve served for 26 years — I’ve never seen such a polarized, one sided, almost abusive power like the Republican party on a variety of topics.”

Rep. Dawn Pettengill (R-District 25), co-chair of the House-Senate Public Retirement Systems Committee issued a statement regarding the accusations that the legislature will make a decision on the state’s retirement system in the upcoming session.

“As Co-Chair of the Public Retirement Systems Committee, I can assure Iowans that there is no threat to IPERS or any other pension system next session,” Pettengill said. “IPERS is well managed and remains one of the most sound pension systems in the country.”

Fitzgerald said that the state’s current IPERS system operates on a 60/40 split in which employees contribute 60 percent to their retirement, with the state contributing the remainder to an employee’s retirement. According to the treasurer’s office, in fiscal year 2018, the state’s specific contribution to IPERS was approximately $107 million.

Under a different defined-contribution plan, Fitzergald said that employees would still be required to pay into a retirement package, with the state contributing an unknown percentage, and a private company managing the fund, with possible charges of fees to manage the fund, with none of the funds guaranteed for a particular retiree, from month to month.

While the circulating draft legislation states that current IPERS recipients won’t be impacted by the change, McCoy said that there’s no guarantee that they’ll have their package indefinitely.

“There is no way to adequately annuitize without a lot of taxpayer money to go into these existing pension plans that are dependent upon new enrollees keeping them afloat,” McCoy said. “So once you cut that off, you strangle and starve that pension program that eventually withers and dies.”

Fitzergerald continued, saying that there are several pending court cases in which retirees’ current pension plans have been cut. Depending on which way a particular court rules, that could lead to a wave of cutting already existing pensions.

“House Republicans are committed to protecting the retirement security of all public pension beneficiaries, and will not advance any legislation that alters pensions next session,” Pettengill said. “Suggestions by Democrats that changes are coming to IPERS, or any of Iowa’s public pension systems, are self-serving and false. The fear mongering tactics being used by Democrats to scare retirees are disgusting.”