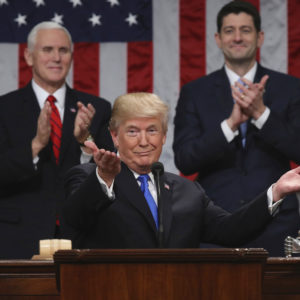 Is Trump a Threat to Democracy?

Dan Helmer is running for the Democratic nomination in Virginia’s 10th House district.  In a television ad, Helmer says: “After 9/11, the greatest threat to our democracy lived in a cave. Today, he lives in the White House.” Is this just campaign hyperbole, or do people really believe that President Trump poses a serious threat to American democracy?

It turns out many serious people do. In a piece urging the election of Democrats to Congress as a constraint on Trump, New York Times columnist Thomas Friedman declared that “American democracy is truly threatened today.” “He [Trump] is forcing a fight for the integrity of our system of self-rule,” wrote Evan McMullin in The Atlantic.  “American democracy finds itself in peril” because of Trump opined Lawrence Douglas in The Guardian. Is it really “code red,” as Friedman says, for the survival of our democratic republic?

Friedman is not wrong in saying that Trump “wants to ignore Russia’s interference in our election,” that his “first thought every morning is, ‘What’s good for me and can I get away with it?,’” that he “shows no compunction about smearing any person or government institution that stands in his way,” and that he “is backed by a party where the only members who’ll call him out are those retiring or dying.” But does all of that (and other moral failings Friedman might have added) lead to the conclusion that our democracy is threatened unless we “put a check on Trump’s power”?  Is the future of our democracy really at risk because “the best Republicans have consistently refused to take a moral stand” against Trump’s indifference, even disdain, for existing institutions and his repeated desecrations of “the basic norms of public life”?

Trump’s critics blame the President for corrupting and debasing our political discourse, as if all was peaches and cream before Trump became a candidate. Friedman remarks on “just how warped our society and government can get in only a few years.” But even a casual observer of 21st century American politics would understand that Trump is not the cause of our partisan and hateful politics. And students of history will know that this is not the first time that hate and partisanship have infected American politics. True, we have never had a president like Donald Trump, but surely American political culture is not so shallow and malleable that one man, even a president, can corrupt and debase it in less than 24 months?

If anything about the Trump administration threatens our democracy it would be abuses of executive authority. While it seems incontestable that Trump has authoritarian inclinations and lacks even the basic understanding of our Constitution and government, Friedman and the rest of the red code brigade offer few concrete examples of actual abuses of power. Though Trump has talked a big game, mostly out of ignorance about the separation of powers, he has really done little beyond following the lead of his predecessors in seeking to expand executive power. As Jeet Heer observed in The New Republic, “[t]he big takeaway from the first year of Trump’s presidency is that the country’s institutions largely have checked him.”

Friedman says he actually agrees with some of Trump and the Republican Party’s policy goals, but that the only thing that matters in the upcoming midterms is the election of enough Democrats to give the party control of at least one house of Congress as a “lever of power that can curb Trump.” In this, Friedman assumes that Democrats will vote as a block in opposition to whatever Trump supports. Sadly, he is almost certainly correct about that. And therein lies the real threat to our democracy. Democrats and Republicans alike have embraced partisan victory, rather than the general welfare, as their mission. Or as David Brooks has written in the New York Times, the chief interest of both parties is “proving that the other party is despicable.”

Although Trump is rude, crude, mendacious and often ill-informed, he is only a symptom of what ails our politics. Uncompromising partisanship without regard for the public good has immobilized Congress when power is divided, and freed one party or the other to dictate when they are in control (witness the Democrats’ 2010 Affordable Care Act and the Republicans’ 2017 Tax Cut and Jobs Act). Our constitutional founders sought to limit the risks of such majoritarian factionalism, but even their genius could not guarantee against the blind pursuit of power.

Trump is a problem, but he is not the problem that threatens our democracy. As Steven Levitsky and Daniel Ziblatt, authors of the recent book How Democracies Die, wrote in The New York Times several months ago: “[W]hile Mr. Trump’s autocratic impulses have fueled our political system’s mounting crisis, he is as much a symptom as he is a cause of this crisis.” The crisis, as they see it, is that “the norms that once protected our institutions are coming unmoored.” Getting rid of Trump would make the Trump resistance feel better, but it will not cure what ails our democracy. Only abandonment by both parties of the politics of uncompromising resistance can return our ship of state to safe harbor.