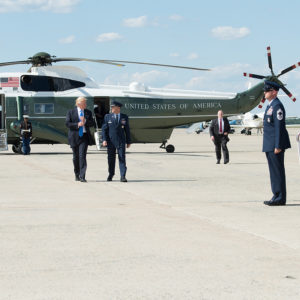 Under Trump, U.S. Is Again Leading the Free World

American leadership in the world is getting stronger — and not a moment too soon.

Under President Trump, the United States is again standing up for its friends and interests, a thrust that translates into at least beginning to reclaim America’s role as leader of the Free World.

For generations, the United States stood as a bulwark of freedom around the globe, facing down the Soviet Union, winning the Cold War and serving as a beacon of capitalism and democracy. The result of this Pax Americana was a world of spreading wealth and freedom.

President Barack Obama steered America away from that role, apologizing for the United States, gutting the military, defaulting to a feckless United Nations, leading from behind (Libya) or not at all (North Korea). He undermined democratic allies, such as Israel, and wooed hostile dictatorships, such as Iran, Cuba, China and, for most of his eight years in office, Russia.

The result was a world of declining freedom and growing tumult. By the time President Trump took office, Russia had seized Crimea from Ukraine. China had dramatically accelerated its island-building territorial grabs in the South China Sea. The so-called Arab Spring of 2011 had devolved into years of carnage in Syria, with refugees flooding into Europe, the rise of ISIS and a resurgent Russian military reach into the Middle East. Libya had collapsed into a terrorist haven where for the first time in 33 years — in a terrorist attack in Benghazi, 2012 — an American ambassador was murdered on the job.

Side-by-side with Russia and China, plus the major powers of Europe, Obama cut a nuclear deal in 2015 with Iran, the world’s leading state sponsor of terrorism, that has left Tehran flush with resources, but will not stop Tehran from getting the bomb. North Korea, taking advantage of Obama’s passive policy of “strategic patience,” completed a dynastic transition of power, carried out four nuclear tests on Obama’s watch and now appears close to fielding nuclear missiles that could reach the United States.

Today, the 21st-century world order is bedeviled by a rising network of powers hostile to the United States and its allies. Rolling back this menace is a tall order. But on an array of fronts, Trump has begun altering America’s course, and the world’s, for the better.

For starters,Trump has begun restoring the squandered credibility of American firepower. This is vital to any hope of deterrence. In Syria, where Obama in 2013 erased his own red line, Trump this April laid down a big marker with the launch of Tomahawk missiles against a Syrian airfield. Trump then informed the visiting president of China, Xi Jinping, — over a dessert of chocolate cake — that the United States had just carried out the missile strikes. It was a deft warning not only to China but to countries such as North Korea that America is again a force to reckon with. So was the Trump administration’s first use in combat of the “mother of all bombs,” a MOAB, or Massive Ordnance Air Blast, against ISIS in Afghanistan, as well as the U.S. shootdown this month of a Syrian warplane.

Trump has been shoring up some of America’s most beleaguered allies, such as Israel, which he visited in May via a taboo-shattering flight directly from Saudi Arabia. It was part of his message encouraging Middle East nations threatened by Iran’s growing reach to cooperate with one another.

Trump was right to pull out of the Paris climate accord, which, via highly politicized ideas about climate, was configured to choke and fleece the U.S. economy. And he was right to chastise wealthy members of NATO for failing to contribute their promised share to the common defense. Such moves are not popular with free-riders, but they do constitute leadership.

There’s still far to go, to restore America as a beacon of the Free World, and deal with the rising threats. But at least America these days is heading in broadly the right direction.

Claudia Rosett is a foreign policy fellow with the Independent Women’s Forum. She wrote this for InsideSources.com.