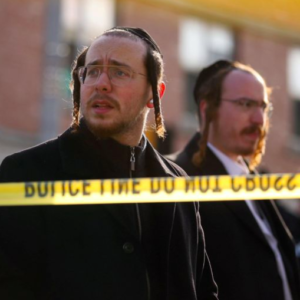 When People Care More About Definitions Than Dead Jews

The incident was overshadowed by news that President Donald Trump intends to sign an Executive Order that gives the Department of Education the power to withhold funds from universities that fail to take action to combat anti-Semitism on campus.

Although not yet signed, the order attracted more airtime and outrage than the third-most deadly anti-Semitic attack on American soil in less than two years.

One day after the murderous rampage in New Jersey, all anyone wants to talk about is whether or not the U.S. government is stifling criticism of the Jewish state. That’s how cheap Jewish life has become — criticism of Israel is being prioritized over Jewish safety, particularly on college campuses.

I graduated from the University of Southern California in 2017. On two separate occasions, I saw swastikas spray painted on campus. Another time, a white supremacist group hacked into the university libraries and mass printed anti-Semitic flyers. I even saw a vendor selling “friends of the swastika” T-shirts on the quad.

In times like these, you’d expect college social justice groups to rally around a targeted minority. But there were no demonstrations in solidarity for us Jewish students. When student activists pursued a diversity resolution, combating anti-Semitism was not even listed as a cause. Instead, campus leaders co-sponsored Palestine Awareness Week — an event largely dedicated to Israel protests.

While in the student government office, I overheard the president of the Women’s Student Assembly planning an event for PAW. When a colleague suggested presenting the Israeli viewpoint, she told him, “I feel that I was elected because of my political stance, and I honestly don’t want to use our funds for a Jew to speak.”

My experience, unfortunately, is no anomaly. Ever since 11 Jews were gunned down in Pittsburgh’s Tree of Life Synagogue, anti-Semitism has surged on campuses, according to Inside Higher Ed. Meanwhile, administrators and campus communities have been consistently weak in responding.

Protecting Jews from murderers and harassers alike should be a priority. This order, which enjoys bipartisan support and offers a new avenue for American Jewish students to protect themselves from discrimination, is one of the few concrete actions the government has taken to aid Jews in a time of lethal anti-Semitism. But rather than raising awareness of the freshly spilled Jewish blood in Jersey City, the public is fretting over definitions.

“Trump isn’t targeting anti-Semitism. He’s using a bogus definition of anti-Semitism to target critics of Israel,” tweeted columnist Peter Beinart. “The moment that Trump’s IHRA definition of anti-semitism is enforced on university campuses, it will officially be the death of free speech and academic freedom on Palestine,” sounded off another critic. “President Trump to do in the US, what Labour’s opponents already did in the UK: impose a propagandistic ‘definition of anti-semitism’ to silence criticism of Israel and attack the Left,” a third hammered down.

The current State Department’s definition of anti-Semitism in no way condemns all criticism of Israel. It states that it’s hateful to accuse Jews as a people, or Israel as a state, of inventing or exaggerating the Holocaust. It tells us it’s bigoted to claim Jews are more loyal to Israel than their home country. It says that it is prejudiced to demonize Israel, hold it to a double-standard than other nations, and deny the Jewish people their right to self-determination.

These pillars are not right-wing concepts. Last month, Bernie Sanders wrote: “Criticism of Israel can cross the line into anti-Semitism, especially when it denies the right of self-determination to Jews.” If the definition is liberal enough for America’s most foremost democratic socialist, liberals should think twice before dismissing it.

It is telling and dangerous that so much energy is spent debating the goalposts of anti-Semitism before the dead in Jersey City have even been laid to rest. Why are we more protective of how people can criticize a state thousands of miles away than we are of Jews being marginalized and murdered in America?

Ariel Sobel is an editor-at-large of the J’accuse Coalition for Justice. She wrote this for InsideSources.com.