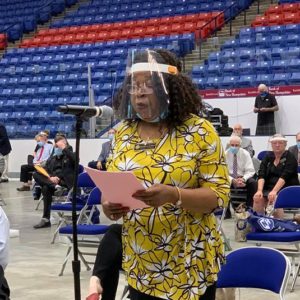 Representative Linda Harriott-Gathright (D-Nashua) addresses her fellow house members on June 11, 2020 during a session held inside the Whittemore Center at the University of New Hampshire due to the COVID-19 pandemic.
[IS] Opinions

‘Who Was George Floyd?’

Posted to Politics June 13, 2020 by Charlotte DiLorenzo and Linda Harriott-Gathright

At the conclusion of the New Hampshire House session on Thursday, June 11, 2020 Reps. Charlotte DiLorenzo (D-Newmarket) and Linda Harriott-Gathright (D-Nashua) took Unanimous Consent to speak about George Floyd. The text of their speech is provided in its entirety below:

Who was George Floyd?

George Perry Floyd was a 46-year-old Minnesota man who was a son, brother, father, uncle, nephew, and a friend to his neighbors and church family. George, sometimes referred to as Perry, is lovingly remembered by his family as Georgie Podgy or Big Floyd.

Born in North Carolina, George’s family moved to Houston, Texas where he was a star player for the Yates High School football and basketball teams. George, at 6-feet 4-inches tall, was recalled by his friends and family as a gentle giant with an easy smile and a deep, bass voice. In school, he loved to joke with his classmates, and despite his size was known to be a pretty mellow person.

Awarded a sports scholarship, George was the first person in his family to attend college. After 2 years at South Florida Community College, George transferred to Texas A&M. After dropping out of college, George returned to Houston and worked as an automobile customizer and was a hip-hop music artist. Mr. Floyd fell on hard times and spent time in prison.  One time he spent 10 months in jail after being found guilty of a $10 drug offense.

After fulfilling his sentence, and debt to society, George moved to Minneapolis, Minnesota to start a new life. He found work as a truck driver and a restaurant/nightclub bouncer and he became a church member and volunteer.  George went on to work as a security guard at a Salvation Army Homeless Shelter and Transitional Housing facility.

In his new life, Mr. Floyd made an anti-violence video and served as a mentor for the young men of his church.  When the COVID-19 shutdown closed many businesses, George was laid off from his job. In April, 2020 George contracted and survived the virus.

The COVID-19 virus shutdown changed the financial circumstances and impacted the lives of many Americans including Mr. Floyd’s. On a scale deeper than that of the great recession, Americans were locked out of their livelihoods, locked in their homes, by a stealth pandemic that claimed more than 100,000 American lives.

Memorial Day, May 25, 2020, a day Americans pay honor to our military veterans was strangely somber. There were no parades or public ceremonies honoring our military heroes.

On that fateful Memorial Day George, under suspicion for allegedly trying to pass a $20 counterfeit bill at a neighborhood store, lost his life during an arrest when a uniformed Minneapolis police officer pinned him down and knelt on his neck. Handcuffed, and physically suffering, Mr. Floyd called out for mercy. “I can’t breathe.”

Those Minneapolis policemen did not hear George, they did not let him breathe. George called out for his mother and he still could not breathe. Were it not for a brave, young woman who recorded the incident with her cell phone, we might not have known the true story of how George Floyd lost his life.

Now the entire world knows that George Floyd’s life was snuffed out by the weight of a man whose duty it was to serve and protect, a man who decided he was judge and executioner, while three other policemen, George Floyd’s de-facto jury, looked on. Those four men broke their pledge of allegiance to liberty and justice for all.

The whole world is watching America: the land of the free, a land where the lives of black men, women and children have suffered and been killed by racist violence for over 400 years. Today we say “enough is enough.” It’s time America, for you to fulfill your promise of life, liberty and the pursuit of happiness for not just some of the people but for all people regardless of race, ethnicity, creed, national origin, sexual identity, age, disability or income level. This is America’s promise.

George Perry Floyd did not die in vain. His last gasp for precious breath sent a shock wave around the globe. People rose up and protested, colleges have launched scholarship funds in Mr. Floyd’s name and local, state, and federal governments are crafting much needed reforms in our criminal justice system.

People all over this country are crying out:  Black Lives Matter. We will not rest; we will not retreat until justice is served for George Perry Floyd and the many other George Floyds of our country.

Representatives Charlotte DiLorenzo (D-Newmarket) and Linda Harriott-Gathright (D-Nashua) are members of the N.H. House of Representatives.