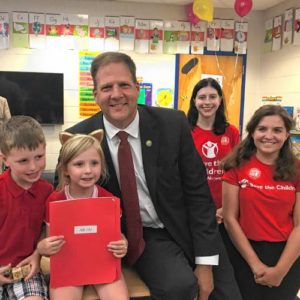 New Hampshire Democrats and the state’s teachers union rejected Gov. Chris Sununu’s back-to-school guidance within minutes of its release Tuesday, due to its lack of mandates for mask wearing and classroom distancing.

In doing so, Democrats may be setting up a political battle between state vs. local control of schools — and putting themselves on the losing side.

Sununu’s 54-page guidance, announced at a Tuesday presser, was developed in conjunction with the School Transition Reopening and Redesign Taskforce (STRRT) Sununu allies are quick to point out the task force included some of the same groups who are now criticizing the guidance they helped create.

“All the guidance that we’ve put out today comes with from the recommendation of STRRT task force, and they did a great job,” Sununu said.

Sununu and his critics agree that the basis of the guidance he issued is “flexibility.” His view is that the state should lay out best practices for health and safety, while leaving local school districts to decide the specific educational approach: Full classroom instruction, remote learning or a hybrid system involving a mixture of both.

“The example I like to use is the elementary school over in Croydon. It has about 30 or so students. It’s very different from Manchester Central High School with 1,500 students, right? It’s got different dynamics, different capabilities, and different resources that might be at hand for the town and for the school,” Sununu said.

“And so by providing the guidelines but allowing the teachers and administrators to manage, what we’ve really tried to do is make sure we didn’t create something so rigid that it was doomed to fail.”

The most contentious aspect of this approach is Sununu’s refusal to issue a mask mandate for all public school students.

“Today, Governor Sununu failed the students and hard-working staff at New Hampshire schools. Let me be clear —flexibility is not a plan,” Chair of the House Education Committee Mel Myler (D-Hopkinton) said in a statement. “New Hampshire has always prided itself on local control at the school level but during a pandemic, as the governor demonstrated when he closed schools in March, the state must lead.”

The two Democrats competing in the gubernatorial primary for the chance to challenge Sununu both expressed their opposition via Twitter during the presser.

“With less than two months before school starts, families and teachers wanted certainty, Gov. Chris Sununu just delivered chaos. By punting responsibility, Sununu is leaving our families and our schools on their own,” tweeted state Sen. Dan Feltes.

Executive Councilor Andru Volinsky tweeted: “Let’s call Sununu’s ‘plan’ for what it really is — the state abandoning its responsibility to ensure the health, safety, and well-being of students and teachers. Disappointed but unsurprised. Sununu’s school reopening “plan” another blow to students and educators from Sununu-Edelblut-DeVos agenda.”

Sununu repeatedly pointed out that his guidance strongly recommends masks at schools when social distancing isn’t possible. At the same time, Sununu said, the state needs realistic plans that aren’t all but certain to fail.

“You can issue an order that, on a school bus, you can only fill every other seat and every kid absolutely must be masked, no exceptions,” Sununu said.  “But I think the [STRRT] taskforce realized this might not be very practical. Is the bus driver going to have to stop every a hundred yards to make sure every kid is putting their mask on and not playing with it?”

And thus the battle lines are drawn: Local control vs. state mandates.

“The New Hampshire tradition of local control isn’t something that we get to pick and choose around,” Phillip Nazzaro of the State Board of Education told NHJournal. “Either we have a strong central authority or we live our state motto and trust local communities to make the decisions right for them. No two communities are experiencing COVID-19, or any situation, the same way. The one-size-fits-all approach rarely if ever works.”

The National Education Association of New Hampshire, however, has a different view. It issued a statement Tuesday rejecting Sununu’s approach and also urging more state mandates.

“There are far too many ‘shoulds’ in this document to keep our students and staff safe, leaving more questions unanswered than answered,” said Megan Tuttle, NEA-NH President. “In the middle of a pandemic, the Governor has put the priority on flexibility leaving thousands of students and staff to fend for themselves at the local level.”

But what does “fend for themselves at the local level” mean? Having to live by the contracts teachers have signed with local governments? If so, then teachers may find themselves facing the prospect of returning to class or losing their jobs, if they teach in districts who decide to return to classroom education.

“School buildings will need to have their HVAC systems cleaned and, in many cases upgraded. Effective procedures to regularly maintain them will also need to be put in place. No student or educator should be allowed back into any school building if the school district has not designed or implemented classroom, bus, and hallway layouts that accommodate six feet of distancing,” the NEA-NH says in a statement.

In some school districts, this may simply be impossible, which would mean that parents wouldn’t be able to send their kids back to class even if the overwhelming majority wanted to. It would mean that union demands must be met before teaching can begin.

So, is local control of schools still a potent issue in New Hampshire politics?