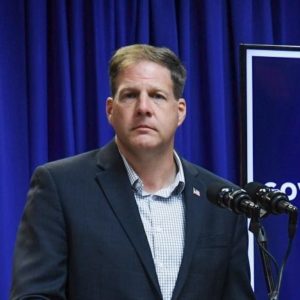 During Thursday’s COVID-19 presser, Gov. Chris Sununu told NHJournal he hopes the volume of data confirming the safety of New Hampshire public schools will encourage more systems to abandon the remote-only model, a model he says is damaging to child development.

“Now that we have a month’s worth of data under our belts with kids that have been in school, there is a very, very low percentage rate” of positive tests among K-12 students, Sununu noted. “The data show there were about 60 or so kids out of the 190,000 in the state who’ve tested positive. That’s low, even relative to our already low percentage rate in the general population.

“And my hope is that some of the schools who are in a fully remote position right now will look at that data…to make the decision to advance to a hybrid model, or maybe even back to [full classroom instruction] model sooner than later, especially given the fact that so many folks are looking for that to actually happen.”

Sununu also referenced a report from NHJournal that Granite State schools were ranked the fifth-safest to reopen in the country, an achievement he credited to the Department of Health and Human Services, state epidemiologist Dr. Benjamin Chan and the work of local school officials.

And yet the Commissioner of Education reports nearly one in five schools are keeping their classrooms entirely closed to students. Another 42 percent of districts are using a hybrid model that allows only part-time classroom instruction. Just 40 percent of New Hampshire school districts are open for in-person learning every day.

Among New Hampshire’s private schools, the story is very different. The Diocese of Manchester announced last month that 487 new students enrolled in their 18 diocesan Catholic schools this summer, bringing total enrollment to 3,427 — with another 200 or so on the waiting list. These schools are offering full classroom instruction.

“We are thrilled that we were able to welcome almost 500 new students into the beauty and excellence of Catholic education. This is a testament to what so many New Hampshire families are looking for,” said Alison L. Mueller, Director of Marketing, Enrollment, and Development for Catholic schools.

The total number of K-12 students hospitalized for COVID-19 since schools reopened is zero.

Sununu says that the conversation about reopening classrooms should go beyond the low risk of COVID-19 infection and address the costs of keeping classrooms closed. “We need to discuss all the other ancillary benefits of allowing kids to come back into the classroom: actually meet the teacher, allowing the teacher to have a better understanding of their [students’] learning styles, allow some of the socialization to happen, allow some extracurricular activities to happen.

“There’s a lot of positivity to bringing these kids back, while following the guidance documents and managing the social distancing and the mask wearing. I think the majority of the schools that are open in the state have shown there’s a model to be successful,” Sununu said.

In the new Granite State Poll from the University of New Hampshire Survey Center released Thursday, Sununu had an 80 percent approval rating for his handling of the COVID-19 pandemic.