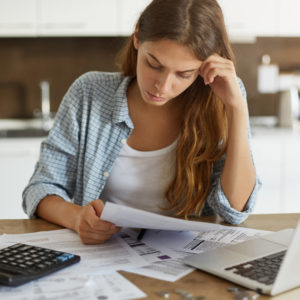 72 Percent of Credit-Challenged Americans Set Back by COVID-19

An all too familiar statistic is the Federal Reserve’s 2018 finding that 40 percent of Americans would struggle to pay for a $400 emergency expense, signaling that despite a decade-long bull market on Wall Street, millions on Main Street continued to live only one crisis away from disaster, even during boom times.

For many, that disaster arrived in the form of the deep economic recession caused by the COVID-19 pandemic, as millions of Americans lost their jobs in mere months.

So, while the federal government’s economic response has been effective thus far in preventing conditions from rapidly deteriorating, short-term stimulus has merely forestalled and obscured the difficult reality that awaits millions of people who live paycheck to paycheck.

These Americans, absent any buffer, have likely fallen behind on bills before, putting many among the 38 million Americans with credit scores below 600, a level banks consider “subprime,” meaning they are too risky to qualify for traditional loans.

People who don’t qualify for traditional loans have always faced limited options for coming up with extra cash when bills, housing (the federal eviction moratorium has expired) and meals need to be paid for — and the pandemic has dealt this broad group of Americans a massive setback.

A recent study by OppLoans examined this extensively — that is, the financial plight of Americans with self-reported credit problems since COVID-19 entered the picture — and the results were alarming.

Nearly three-quarters of respondents — 72 percent — said they’d been financially set back due to the pandemic and about one in five (18 percent) said they’d over drafted their bank accounts.

In other words, for a stunning amount of people, an expense of $1 would technically be an issue because their bank accounts reached zero — all tied to events that have happened since March despite stimulus efforts.

And while it’s widely known that the pandemic has disproportionately hurt older Americans’ health, the same study found that young adults aged 18 to 34 (presumably with the least wealth to fall back on) seem to have been hit hardest from a financial perspective.

One in five (20 percent) respondents that report losing financial ground believes they’ll never fully recover, and a similar number (19 percent) worry about losing their homes because of COVID-19.

What’s more, the pattern that arose following the Great Recession in which lenders sought to rid their balance sheets of risky assets to ensure solvency through difficult times — the move to focusing squarely on the “super-prime” borrower with a credit score above 740 — has accelerated since March.

Access to loans has tightened up substantially for anyone without strong credit as the financial system shifts to “safe-mode,” and with millions of jobs lost, borrower risk profiles are changing so rapidly that lenders’ perception that they’re flying blind has caused them to drastically pull back on lending to those who need it the most.

Put simply, the system’s ability to keep bad yet salvageable situations from turning into bankruptcy is lessening at a time when communities need it to increase.

So, while banking regulators urge lenders to get more involved, the foreboding past studies from the Fed that have long been discussed no longer capture the level of urgency with which leaders of industry and policymakers must act.

Whether it’s policies, products or services, there needs to be a greater conversation about the credit-challenged during this time as they’re truly on the precipice, as many could still be helped back into the traditional financial system rather than pushed further away.

Jared Kaplan is the chief executive officer of OppLoans, a leading financial technology platform that provides accessible products to credit-challenged consumers. He wrote this for InsideSources.com.