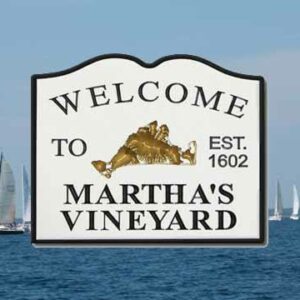 “Look, he’s sending Venezuelans who were coming here, fleeing the successor to Hugo Chavez’s disaster because the guy doesn’t want to go, and he has no economic answers. Right? So he (DeSantis) sends them to Martha’s Vineyard. Why? Because Martha’s Vineyard symbolizes where the elite goes on vacation.

“It was also the first place that welcomed Black professionals and business people from the South to come and live on equal terms in a community that was largely created for religious reflection and study. So that’s what’s going on. And I don’t know what Massachusetts is going to do, but I bet that they will make those people feel at home.”

Well, Massachusetts was among the first five states to abolish slavery — in 1783, the same year the Revolutionary War ended. (The other four were Pennsylvania, New Hampshire, Connecticut and Rhode Island.)

Simply put, if you’re shipped somewhere — even temporarily — why not the Vineyard? And despite the lawsuits claiming the migrants were used as state government pawns and DeSantis labeled as being a political stuntman, Martha’s Vineyard is better than other destinations. Also, DeSantis and Republicans have been accused of trying to stoke their constituency with fears of immigration/open borders before the elections.

Well, as Arthur Cyr, professor of political economy and world business at Carthage College in Kenosha, Wis., said, “Republicans have no monopoly on scare politics.”

That means Democrats partake, too.

The Vineyard certainly was better for former Black slaves 200-plus years ago.

“Martha’s Vineyard was part of the underground railroad, so it was known as a safe and welcoming community for African-Americans,” Nancy Gardella, executive director of Martha’s Vineyard Chamber of Commerce, told Vox Media. “They didn’t feel entirely welcome in other beach enclaves.”

Postal worker Victor H. Green, in 1936, published “The Negro Motorist Green Book” to guide Black travelers to safe, hospitable places during racial segregation. The book was the focus of a 2018 movie starring Viggo Mortensen and Mahershala Ali. Among the safe spaces listed in the book was Shearer Cottage, a Black-owned inn in Oak Bluffs.

Migrants Pedro Torrealba and Luis, who declined to give his last name, are two transplants in Martha’s Vineyard. “I didn’t expect it to be like this, but I feel comfortable here,” Luis, who traveled two months from Caracas, Venezuela, to Texas before going to the Vineyard, told The New York Times. “I want to be here.”

The locals brought food, money, supplies, clothes, toys and games to assist in the relief effort for the migrants. Several migrants with emergency dental problems were treated by area health-care specialists. High school faculty and students assisted as translators for a mostly Spanish-speaking population of newcomers.

Vineyard locals mobilized. OK, so how about a new federal immigration bill?

Torrealba, a trucker in Venezuela barely able to feed his family, said he was pleased to have almost made it to a big American city where he hopes to work. “I feel really good,” he told The Times. “Before we got here, I felt a little lost, because I didn’t know if I was going to get here. But now that I’m here, honestly, I don’t want to leave.”

All this raises an interesting question: What happens if a migrant becomes so enamored with their new environment at Martha’s Vineyard when the dust settles?

“I don’t have to catch my breath here,” said Skip Finley, a Black author writing in his  Vineyard newspaper column and whose family had vacationed on the Vineyard for five generations before he lived there. “It’s the freest place I’ve ever been.”

With that, remember the poignant thoughts of Pedro and Luis.