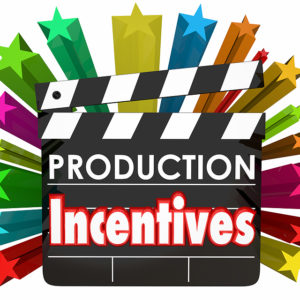 Think your industry’s taken a vicious lockdown hit? According to the U.S. Bureau of Labor Statistics, between July 2019 and July 2020, employment in motion picture and video production dropped by 47.7 percent.

Tinseltown, of course, has been hurt the hardest.

A FilmLA analysis showed that compared to the same period the year before, Quarter 2 of 2020 saw the number of shoot days in Greater Los Angeles drop by 97.8 percent.

Quarter 3 crawled its way back to merely a 54.5 percent decline, but in late June, experts told The Wall Street Journal that “[p]erformers, production crews, ride-share drivers and personal trainers were among the first to lose work and will likely be among the last to regain lost ground.”

But let’s not get too weepy for Hollywood. The entertainment industry enjoys a ravenous demand, in times good and bad. And out in the sticks, piles of “public” cash are waiting.

About half of the states have some type of subsidy system for film and television production. The policies, pitched as “economic development” to governors and legislators eager to hang out with trendy directors, flirtatious starlets and muscle-bound action heroes, began to be enacted around the turn of the century.

Copying the generosity of Canadian “incentives,” Louisiana, New Mexico and Pennsylvania were early adopters. Many others followed.

Then came the backlash.

Probing by legislative researchers, tax departments and think tanks of all ideological persuasions found that the effort to induce “runaway productions” — i.e., film and television shoots that grabbed the billions of dollars offered beyond California and New York — was counterproductive.

Return on taxpayer “investment” was poor. Transparency and accountability were weak, if not nonexistent. In 2016, a study by Michael Thom, a professor at the University of Southern California, examined “job growth, wage growth, states’ share of the motion picture industry, and the industry’s output in each state.”

It found that “the only benefits” of the programs were “short-term wage gains, mostly to people who already work in the industry. Job growth was almost nonexistent. Market share and industry output didn’t budge.”

A year later, Virginia’s Joint Legislative Audit and Review Commission concluded: “The percentage of nationwide film production employment located in California and New York (67 percent) in 2016 has barely changed since 2001 (69 percent).” Three years later, the share of jobs located in the two states was basically the same: 65 percent.

Breathless press releases from dozens of state film bureaucracies notwithstanding, California and New York have proved too powerful to suffer fatal damage from their competitors.

Plus, the two states backed up their dominant positions with big bucks. California’s “Film & Television Tax Credit Program 3.0” will bestow $330 million to productions every year through 2025.

In January, the nonprofit CalMatters reported that the subsidy was once “controversial,” but “has become, over the years, a sort of ‘Titanic’ of fiscal programs — sprawling, sentimental and popular across the political spectrum despite its formidable expense.”

Fiscally savvy elected officials knew that they were beat.

In January 2018, the National Conference of State Legislatures documented that in the previous nine years, 13 states had “ended their film incentive programs.” But undaunted, dead-enders pressed forward. And in 2020, they’re not letting a pesky thing like COVID-19 snuff their starry-eyed dreams.

The business agent for Local 489 of the International Alliance of Theatrical Stage Employees union is delighted that “we are starting back to work” in metro Pittsburgh. (Her dues-payers “are running out of unemployment.”)

Whether your “vision” is “Gotham City, the Devil’s Playground or a perfectly anonymous slice of suburbia,” the Pennsylvania Film Office is able to help, with “a great tax credit and our state’s keystone: supportive, friendly people.”

The Peach State has taken to calling itself “Y’allywood.” In 2008, “the government folks did some smart governing and passed a 30% tax credit for productions shot in Georgia, and since then the film industry has really taken off!” The “Now Filming in Georgia” website lists MGM, FOX, Bravo, AMC, Netflix, Discovery, Starz, A&E, TLC, Shudder and Disney as currently shooting projects.

New Mexico, a state racked by appalling socioeconomic conditions, is probably the saddest example of corporate welfarists’ brutal predation of an ignorant citizenry. In 2019, its legislators more than doubled the $50 million they annually directed Hollywood’s way. Amazingly, that same year, employment in the industry was lower than it was in 2008.

No matter. Subsidizing film and television production may be economic-development hell for taxpayers.

But it’s great box office for producers, performers and pols.