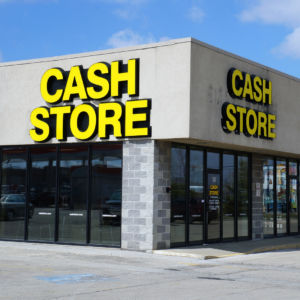 A Solution in Search of a Problem

But if you need a loan (or medical care) right now — not next week — then a conventional bank (and your regular doctor) probably won’t be able to help you. No matter how much you offer to pay for their services.

Payday lenders are short-term lenders and — like urgent-care clinics — offer “right now” services. You pay extra for that. They also offer convenience. You pay more for that, too.

And because of that, they’re slammed.

But urgent-care clinics, 7-Elevens, nice restaurants and the airlines aren’t targeted by the government. Neither, interestingly, are conventional banks that charge $200K in interest on a 30-year $250K loan.

Short-term lenders, on the other hand, are.

It’s not because their customers have been complaining. As it turns out, the opposite’s true.

The Consumer Financial Protection Bureau — which regulates the payday loan industry, among other things — set up a website called “Tell Your Story,” where ordinary citizens could lodge complaints about or praise payday lenders.

A Freedom of Information request filed by the Community Financial Services Association — the trade association that represents short-term lenders — discovered that over the last five years, 2,308 positive “stories” were submitted to the CFPB’s online BBS.

These represent 98 percent of all the “stories” submitted.

But CFPB buried them; the positive responses were never made public. The impression was left that “action” was needed to “correct” abuses that appear to be entirely the product of CFPB’s bureaucrats — who have a vested interest in convincing the taxpaying public that “work” needs to be done, even when it doesn’t.

Had it not been for the FOI request filed by the Community Financial Services Association no one would ever have known just how much the public supports short-term lenders, as opposed to how much the government wants to undermine them.

The CFPB’s “Tell Your Story” online BBS has been up since 2011 and during that time fewer than 2 percent of the “stories” left have been critical. The Federal Trade Commission — under whose auspices the CFPB operates — reports that 0.003 percent of all the consumer complaints it receives are about short-term lenders.

Clearly, what we have here is a solution in a search of a problem.

Dennis Shaul of the CFSA says that the CFPB is “pursuing (an) ideological crusade” against payday lenders.

It is an ideological crusade. A witch hunt. The government doesn’t like payday lenders and — assuming the role of high priest — intends to “do something” about them. Like impose limits on how much interest they may charge.

But this ignores the fact that short-term loans are … short-term loans. Interest rates are higher because they have to be in order to make the loan worth making. A conventional bank can get away with charging “low” 4 percent interest over the course of a 30-year loan. Because the lender will be collecting interest for 30 years. On a low six-figure principal, the total amount of interest paid will end up being … six figures.

Meanwhile, a short-term loan (a week is typical) is excoriated for charging a higher rate to make up for the fact that the loan period is measured in days rather than years.

Also, short-term loans are high-risk. Unlike a conventional lender such as a bank or credit union, which does exhaustive checking of the borrower’s ability to repay the loan before approval of the loan, short-term lenders issue loans based on skimpier criteria, such as a pay stub or vehicle title. The transaction often takes less than an hour — versus at least several days and sometimes, several weeks, for a conventional loan.

Payday lenders do charge higher rates. They do so to make a buck, of course. But also because they have to, in order to offset the higher risk and shorter duration of the loan as well as in return for the convenience they offer.

Like an urgent-care clinic — where you’ll probably pay more for right-now medical care than you would if you wait until tomorrow (or the next day) when your regular doctor has time to see you.

None of this is evil — unless you consider having more options at varying price points available evil.

Whose interests are being served by demagoguing the payday loan industry?

It’s not the people who’ve taken out loans — almost all of whom seem to be satisfied with the service they received, according to the government’s own data. Which — it bears repeating — they tried to suppress.

It certainly won’t benefit the people who’ll be denied loans they need — because the government has made such loans less attractive to offer.

There’s an old idea that a crime requires a victim; that it is the obligation of someone making an accusation to prove harm’s been caused before punishment is applied.

It’s an idea the Feds might want to consider.