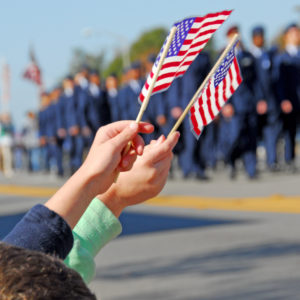 Leading the Charge Transitioning Veterans to the Private Sector

Miguel Sanchez tread an uphill path to Wall Street. He emigrated to the United States from the Dominican Republic as a child, not knowing a word of English. He was raised by a single mom in Paterson, New Jersey — and as he prepared to graduate from high school with lackluster grades, he had no plan for what was next.

That is, until he lucked upon a Marine recruiter at the mall. “I didn’t know much, but I knew it was an opportunity to change my life and be a part of something bigger than me,” Sanchez recalls. He would go on to serve his country in Afghanistan.

Like too many veterans, when Sanchez looked to exit the Marines and return to civilian life, he knew nothing of private-sector work and wasn’t sure how to find any. He recalls walking up and down Madison Avenue with a three-page resume.

Since 2001, more than 3 million veterans have rejoined civilian ranks. While military service ingrains communications expertise, efficiency on tight deadlines, and high-stakes teamwork better than any ordinary office job, soldiers often struggle to translate their talents to the private sector and find purpose.

“Most Army jobs don’t have direct correlates in the civilian sector,” said Jeffrey Wenger, a senior policy researcher at the Rand Corp., who studies the transition of military personnel into the civilian labor force. While private-sector employers value the soft skills soldiers develop, “It’s hard for soldiers to figure out how they can leverage the skills they developed in the Army, especially in the combat arms military occupations.”

Sanchez ultimately landed a job working as a bank teller and attended night classes on the GI Bill. At the bank he caught glimpses of a wider world of finance he never knew existed. His curiosity piqued, he started studying on his own: What are capital markets? The yield curve? Credit default swaps? He soaked it all in. But like many veterans switching fields after military service, he found companies reluctant to take a chance on a new recruit, without the right connections or experience — especially in finance.

Sanchez was lucky to learn from a career adviser about one firm that leads the way for companies looking to set veterans on new career paths.

Academy Securities is the nation’s first and only post-9/11 military veteran and disabled veteran owned and operated investment bank and broker dealer. It was founded in 2009 and boasts an advisory board of top military leaders, including former Joint Chiefs Chairman Gen. Peter Pace and former top military intelligence official Maj. Gen. Spider Marks. The mission-driven firm, Marks says, is “living our values.”

With populism on the upswing and Wall Street greed reviled, this is one investment bank easier to cheer on than Goldman Sachs or Citigroup. Academy’s leadership speaks proudly of its social mission. They aren’t Masters of the Universe dividing the crumbs of a cake. They are men and women who served their country. And the spoils of every deal let the firm hire two more veterans — another sort of service.

Today, military veterans own 62 percent of the firm’s equity, and 44 percent of its employees are veterans. Employees also have the opportunity to earn equity in the company. But the broader mission is to apprentice military veterans to Wall Street veterans — to reward talent and hard work with the advancement through the ranks that soldiers seek and expect. Academy hopes the vets learn the ropes and stay for the long term, but the firm also speaks proudly of the veterans who’ve gone on to larger firms.

Starting as an intern and working his way up, Miguel Sanchez has now been at Academy for nearly three years. He’s sat side by side with mentors who helped him learn the ways of Wall Street, and he’s used hard-won military skills to deliver results in a field that would have been next to impossible to break into without a firm like Academy.

This Veterans Day, consider the challenges confronting veterans returning home from service. We have the greatest fighting force in history, and we must do more to welcome them back to the workforce and take full advantage of their skills and training. Academy Securities leads the charge.