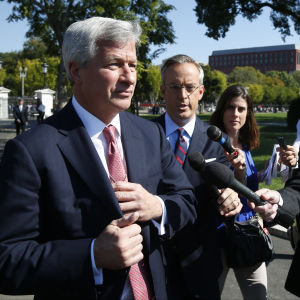 Jamie Dimon, president and chief executive officer of JPMorgan Chase, is questioned by reporters as he arrives with other financial leaders for a meeting with President Barack Obama, Wednesday, Oct. 2, 2013. (AP Photo/Charles Dharapak)
News

Washington Refused to Break Up Big Banks, but Activist Investors May Force Changes

Washington didn’t break up Wall Street banks after the worst financial crisis since the Great Depression. But more than half a decade on, pressure is emerging from investors who want big banks to do to themselves what the U.S. Congress declined to do, but for a more prosaic, if supremely capitalist reason, than the cataclysms that racked the industry in 2008: they’re a bad investment.

For most of the time since 2008, big banks have had a ready excuse for why they can’t deliver the kind of eye-popping returns that distinguished high finance before the crisis. Unprecedented regulatory changes, they insisted, will take time to digest before we can justify why investors should stick with us.

But the mood may be shifting. There are more rumblings than ever that investor patience is wearing thin, and more demands that big banks like Citigroup and JPMorgan Chase & Co. justify why they wouldn’t be more lucrative if chopped up into their component investment banks, retail operations and asset managers.

“If you wanted to give Citigroup a pass for 5 years, you could do it as a shareholder,” said Fred Cannon, global director of research at Keefe, Bruyette & Woods. “But now the rules are known. And investors want to see a plan that Citi can get returns to shareholders over time.”

Whether it’s brainy analysis from investors or shareholder activism, Wall Street may be nearing the moment where investors realize that the passage of time is not going to solve its problems. Regulators are preparing new measures to limit risk-taking, the traditional avenue toward greater growth, and supervisors are chasing them out of riskier businesses that were supposed to be new sources of revenue. And the political pressure on Wall Street from its criticism remains relentless.

Next week, the Minneapolis Federal Reserve Bank will convene the first of a series of symposia aimed at figuring out whether the biggest U.S. banks need to be busted down to size. Neel Kashkari, a former Goldman Sachs executive who helped run the 2008 bank bailout, is the new head of the regional Fed bank, has become a critic of Wall Street, one with more power than most to do something about the problem of the “too big to fail” banks — ones whose collapse would threaten the entire financial system.

In a roundabout way, the investor criticism of Wall Street runs through Washington because new rules imposed after the 2010 Dodd-Frank Wall Street reform law are forcing a rethink of economies of scale. But unlike in previous years, the rethink is happening in executive suites, not only the halls of Congress.

“A head of an investment bank might ask, ‘Why would I invest more when the regulators are going to find a way to make this business less profitable in the long term?” said George Kuznetsov, head of research at Coalition, a London-based consultancy. “They are afraid that whatever they do, it will never be enough.”

Indeed, just as the regulatory tide appeared to be receding, signs have appeared that Washington has further moves to make.

The Federal Reserve’s regulatory czar, Daniel Tarullo, this month suggested the annual stress tests that the Fed imposes on big banks will become more stringent in light of newly documented ripple effects that would come from a major bankruptcy. And the Fed also plans to dust off its longstanding power to limit how much investors can purchase on margin — that is, with borrowed money.

That said, there are formidable obstacles for activist investors who might trigger structural change on Wall Street. Taking a stake in a Citigroup or JPMorgan that’s large enough to get noticed takes very deep pockets, and a regard for their accounting that prominent investors don’t have. And, while regulators are skeptical of size, their attitude toward shareholder activism remains unknown.

Change is afoot in financial services already thanks to activist investors and new thinking in the C-suite. Trian Fund Management, led by activist investor Nelson Peltz, won seats on the board of Bank of New York Mellon, with the aim of pressuring management to improve returns. MetLife is divesting itself of a large chunk of its U.S life insurance business to duck federal rules aimed at companies that aren’t banks but whose collapse could pose a threat to the financial system.

Carl Icahn, the activist investor, has called on American International Group, to break itself into three parts, which he says would be more valuable than the whole. AIG, Icahn argued to the company’s board, is “too big to succeed.” Like the major banks, the insurer AIG got a federal bailout in 2008.

Goldman Sachs puckishly suggested in a research report last year that JPMorgan Chase would be worth 25 percent more if it broke itself. As it happens, JPMorgan is a competitor of Goldman in investment banking, but that’s a harder criticism to aim at KBW, which this month suggested Citigroup spin off some businesses and split the rest into consumer and corporate banking groups.

“Our argument for breaking up may fall on deaf ears at Citigroup, but we believe we have outlined a credible path that [the company] could take to unlock value,” KBW analysts wrote in the March 20 report.

Bartlett Naylor, a shareholder activist with the liberal advocacy group Public Citizen, finds himself in the position of agreeing with Goldman and KBW.

This month, Naylor succeeded in getting a simple question put before JPMorgan Chase and Citigroup: should the board form a committee to study a breakup? Naylor got a similar proposal put to Bank of America shareholders last year; it won 5 percent of the vote.

JPMorgan plans to push back with the argument that a border-straddling investment and retail bank can win business it would not otherwise have. “Our mix of products and services and our global structure are driven by the clients, customers and communities we serve,” JPMorgan will argue, according to a draft of the proxy obtained by InsideSources.

Naylor, a former financial consultant to union pension funds and Senate investigator, dismissed this argument for sounding good at first blush even as it ignores the challenges of managing an enormous bank.

“I hope it’s time for a mood shift,” Naylor said. “There’s no proof that their size alone gets them deals that they cannot. They are relying on facile arguments that have an initial intuitive appeal but don’t stand up to scrutiny.”

Still, the barriers to an activist investor-driven breakup of a major Wall Street bank are enormous, and they start with the amount of money a hedge fund or other group would have to put up to be heard.

Peltz, the hedge fund founder, at one point acquired 2.6 percent of Bank of New York Mellon to get two board seats. JPMorgan Chase has nearly six times the market capitalization of that company, meaning an investor would need about $5.6 billion to amass a similar stake in what is the largest U.S. bank by assets. And that assumes that the cost of JPMorgan shares would not rise sharply once the activist’s interest became known, as is often the case.

Also, some of the investors with the deepest pockets are skeptical that they can fully understand the risks they are buying when they purchase shares in a major Wall Street bank, making it hard to calculate what they might earn after a long fight to break one up.

Paul Singer, the heavyweight investor who runs the hedge fund Elliott Associates, squared off with Jamie Dimon, the CEO of JPMorgan, at the World Economic Forum in Davos, Switzerland in 2013. Singer told Dimon that the “completely opaque” disclosures of major banks made it impossible to determine if they are risky or sound, a vital first step in the most basic investment.

The unique structure of banking liabilities also helps protect them from the kind of activism that has transformed other companies.

Anat Admati, a professor of finance and economics at the Graduate School of Business at Stanford University, said this distinction matters immensely. Banks work mostly with borrowed money — only a small portion of their capital is money they don’t have to pay back — but if those borrowers can’t hold them to account, they can keep on borrowing. And avoid accountability.

“In a normal company you don’t see this kind of leverage because creditors push back,” Admati said. “But when depositors are creditors, you don’t have pushback.”