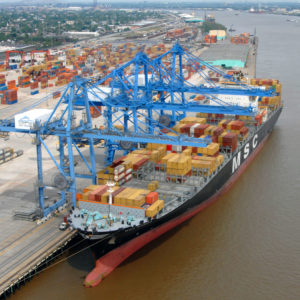 America’s Recovery Flows Through Our Ports

Posted to Finance June 10, 2020 by Paul Aucoin and Sean Duffy

Like all Americans, we are distressed by the effects of COVID-19 and the civil unrest and we look forward to better days ahead. We sympathize with all of those across the nation who are hurting.

As stakeholders on one of the nation’s busiest ports and waterways, we are committed to ensuring that America’s economic recovery is swift and robust.

This is why we are urging Congress and the Trump administration to strongly consider increased investments to our nation’s maritime infrastructure as part of any legislative actions to help the nation manage the economic fallout of the pandemic.

Specifically, it is critical that repairs and advancements to the Mississippi River system be prioritized, targeted and strategically executed.

Congress has provided authority and funding to deepen the Mississippi River Ship Channel to 50 feet and also provided funding to dredge two outlets: Tiger Pass and South Pass. These efforts are essential to ensuring America’s ports remain competitive in world markets, as other nations continue to invest in their own infrastructure in order to expand their market share of international trade.

This is especially true today, because expanded locks on the Panama Canal support the movement of the larger neo-Panamax ships.

Just how critical are the ports in Louisiana to the nation’s economic well-being?

Sadly, our farmers are really hurting due to the pandemic.

According to the American Farm Bureau, crop prices are “falling to levels that threaten the livelihoods of many U.S. farmers. … Shuttered schools, universities, restaurants, bars and cafeterias are no longer buying milk, meat, fruits, vegetables and other food, causing a downward spiral in crop and livestock prices.”

This is why properly maintaining ports in Louisiana is so critical, because they will be essential to reviving the farm economy.

Consider this metric: In Louisiana, opening the Bonnet Carré Spillway has become almost an annual event where the old average was about once a decade. Since this flood control structure was built in 1937, the spillway has been opened 15 times, including seven in the last 12 years and twice in 2019.

Additionally, funding is needed to repair and dewater the Inner Harbor Navigation Canal Lock just below New Orleans. Dewatering is the complex process of removing all of the water in order to complete repairs.

The United States is blessed with more miles of navigable waterways than the rest of the world combined. As our leaders look to make investments in our future, they should ensure our nation’s infrastructure can meet the demands of the global marketplace.

In order to modernize the national waterways infrastructure, we must commit to a long-term strategy to rebuild and maximize our waterways advantage.