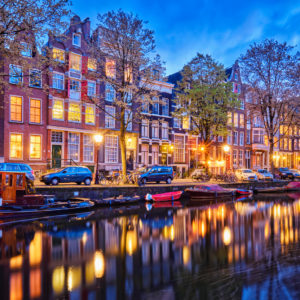 Amsterdam is a city that almost shouts “economics.” Except people in the Netherlands are far too pleasant and polite to shout.

A recent trip to Amsterdam reminded me that, for an economist, it’s a special place. In the 1600s, something unique happened in the Netherlands. The Dutch began looking at merchants and other businesspeople with admiration rather than scorn. In her book, “Bourgeois Dignity,” Deirdre McCloskey says: “By adopting the respect for deal-making and innovation and the liberty to carry out the deals that Amsterdam and London pioneered around 1700, the modern world was born.”

My wife and I took a long boat tour of Amsterdam’s canals. These were the city’s blood vessels, bringing the flows of international trade to individual doorsteps. (It’s astounding to see the extent of the canals and imagine that such a construction project occurred before the machine age.)

Our young boat captain, a recent college graduate, gave the boat’s passengers a thoroughly competent economics lecture — describing the effect of commerce and international trade on his country. The Dutch of past centuries, he said, were deeply religious, but religion was secondary to commerce, giving the country a high degree of tolerance for people of other faiths.

In particular, commercial Amsterdam welcomed Jews to a remarkable degree — a fact that ultimately underlay the story of Anne Frank, whose World War II house we visited. A lifetime of films of books and articles on the Frank Family is insufficient to prepare one for a visit to the hiding place. The schoolchildren streaming through the house were perhaps the best-behaved teenagers I’d ever seen. And it’s especially devastating to imagine that such horrors occurred on such a cheerful-looking street.

The Franks fled Nazi Germany and were welcomed in the Netherlands, where Otto Frank established a successful business. They nearly survived the war in hiding until someone — no one knows who — reported their presence to the Nazis. Economics may have played a role there, too, as their capture occurred soon after the Nazis increased the bounty paid to those reporting hidden Jews.

The beautifully maintained 17th century housing stock also reflects economic whimsy. Taxes were based on the width of houses, so Amsterdammers built narrow, deep, tall houses. This precluded large staircases, so houses had large windows for moving furniture in and out. Hooks protruded from the façades for the ropes and pulleys of moving day. And those façades sloped outward so furniture wouldn’t bang into the lower floors.

In the nearby countryside were the iconic windmills that literally changed the shape of the country. Tens of thousands of windmills pumped water from the ground, thereby reclaiming land from the sea. Mills were highly specialized. We toured one crushing peanuts and flax seeds to make oil. Next door was one powering a sawmill; according to the guide, this technology cut construction time for a seafaring vessel from three months to three weeks — enabling the Netherlands to become the world’s pre-eminent maritime power.

All about the city are references to the Dutch East India Company — the 17th- and 18th-century commercial giant that some reckon to be the largest company in human history. The company was deeply involved in “tulipmania” — the spectacular rise and fall of tulip prices in the 1630s. (Though some modern scholars believe the rise and fall was not quite so spectacular.)

Finally, it struck me that one element of 21st-century Amsterdam stands as a metaphor for the decentralized economic markets that gave rise to Amsterdam in the first place. Omnipresent bicycles and motor scooters make crossing streets into a full-time, life-size game of Frogger. Countless two-wheeled vehicles swoosh mercilessly past in every direction, often with babies and dogs sitting calmly in the baskets. These never-ending, multi-speed traffic flows converge and intricately interweave like flocks of starlings, with hardly anyone stopping or even slowing. Many riders — none wearing helmets — tap out texts on their phones as they ride. Yet we saw no accidents (though they no doubt happen). And all this occurs without centralized direction. Unsettling, but impressive, nonetheless.