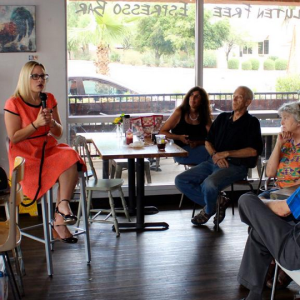 As a Democrat Eyes McCain’s Senate Seat, a Move From Pagan Socialist to Conservative Blue Dog

Fifteen years ago, Kyrsten Sinema wore shabby black clothes, uttered pagan incantations and protested against “corporate” globalization. Today she represents a piece of central Arizona in the U.S. Congress as a Democrat who reveres designer labels and backs one of Wall Street’s longtime legislative priorities.

Sinema’s metamorphosis from leftist rabble-rouser to bank-friendly lawmaker has dismayed a good chunk of the liberal Democratic base in Arizona that thought they had elected a kindred spirit to the House of Representatives in 2012. In particular, they are taking issue with Sinema’s support for legislation that would restructure the Consumer Financial Protection Bureau, the federal agency created in the post-crisis overhaul of U.S. bank regulation in 2010.

“The agency is doing great work, there’s no reason to start fiddling with it,” said Cynthia Zwick, executive director of the Arizona Community Action Association, a poverty-fighting group in Phoenix. “We are really, really disappointed she’s gone down this route.”

Views of Sinema from the other side lean more positive.

Paul Hickman, the head of the Arizona Bankers Association who has known Sinema since law school, said his group has developed a good relationship with Sinema. She sits on the House Financial Services Committee, which writes banking legislation.

“We’ve been in close touch with Kyrsten Sinema,” Hickman said. “We feel she is a non-partisan member on the committee.”

Since the massive 2010 law, known as Dodd-Frank, the financial services lobby has sought to chisel away at the consumer bureau’s work, with the top goal being to restructure it from an agency with a single director — now former Ohio attorney general Richard Cordray — and have it run by a 5-member, bipartisan commission. Republicans have taken up the bankers’ cause, but fewer Democrats have been willing to join them.

In part that’s because liberal icon Elizabeth Warren, now a Democratic senator from Massachusetts, was the main intellectual force behind the agency, and support for it has become a litmus test for many on the left. Also, supporters of the agency claim efforts to restructure the commission are a Wall Street-backed attempt to slow its work.

Rep. Randy Neugebauer, the Texas Republican who introduced the legislation in March, contends that a 5-person board would improve decision making. “To better serve the American people, the Bureau must adopt a more balanced and consultative process,” Neugebauer said when he introduced the bill in March.

In a statement provided by a spokeswoman, Sinema said that the consumer bureau had become “the target of polarizing political games.”

“Looking out for consumers is our top priority, but unfortunately, like too many things in Washington, the CFPB is now a target of polarizing political games. Creating a bipartisan commission to lead the CFPB removes political polarization, reduces volatility, and maintains a truly independent agency,” Sinema said.

Sinema is notable among Democrats for having a list of changes she wants to make to the agency. She is one of only three Democrats backing a bill to revamp it into a commission, legislation that will be considered in committee on Wednesday. She’s voted to roll back its work on discrimination in auto lending, and asked to moderate proposed rules on short-term, high-interest credit known as payday lending. And she is possibly the only one who’s willing to express support for debt collectors, an industry the consumer bureau says affects 77 million Americans.

Local activists say the best explanation for her positions is simply Sinema’s ambitions to rise.

She has been noted as a possible challenger to John McCain, the Republican who has long represented Arizona in the Senate. If McCain draws a credible primary challenger, and Republican Rep. David Schweikert has hinted at just such a move, Sinema might be able to win the Democratic spot opposing either a weakened McCain, or Schweikert, a Tea Party favorite. She would be competing against at least one other Democrat.

“She staked out an identity as a liberal and progressive when she first ran for office, and she carried that reputation forward,’’ said William Moore, a lawyer and Democratic activist in Phoenix. “It turns out she used that identity to climb ladders, and she’s shed it to climb to the next step.”

Sinema, 39, won election to Congress from the Arizona legislature in 2012 with strong support from the gay and lesbian community after highlighting that she’d be — and now is — the only openly bisexual member of Congress.

It’s a turnabout from even 10 years ago, when she was a well-known progressive activist in Arizona. At a protest in Miami in 2003 against a proposed free-trade agreement with Latin America, Sinema was part of a black-clad pacifist group that found itself “singing and spiraling in the pagan’s circle,” according to an email she wrote at the time. She claimed to have been the subject of “widespread police brutality” during the protest, writing, “[W]e were shoved, intimidated, shot with rubber bullets, and hit with tear gas canisters.” An eyewitness confirmed Sinema’s presence at the protest to InsideSources.

An initial foray into politics under the banner of the Arizona Green Party met with defeat, but in 2004 she won election to the state house in a crowded field with about a third of the vote. She won a state senate seat in 2010. As a state lawmaker, she called herself a “Prada socialist’’ on account of her interest in fashion.

After her election to the U.S. House, Sinema soon joined the Blue Dogs, a grouping of moderate House Democrats. In November, Representative Steny Hoyer of Maryland, the second-ranking Democrat, tapped her as part of his whip team, a stepping stone for ambitious members. She founded a political action committee, called the Getting Stuff Done PAC, that’s taken money from mortgage bankers, real estate agents and the U.S. operations of UBS, a large Swiss bank.

While she rose to prominence in Arizona as an opponent of the Iraq War, Sinema also bucked President Barack Obama and, along with Republicans, opposed the agreement to limit Iran’s nuclear program.

But it has been Sinema’s calls for reforms at the CFPB that have most angered liberals.

The agency’s supporters have made the case that the bureau has secured over $11 billion, and counting, in relief for consumers defrauded by financial services industry, breathing life into Warren’s original vision for the agency. Lisa Donner, head of Americans for Financial Reform, a coalition of labor, civil rights and consumer groups that pushed for the Dodd-Frank law dismissed the notion that Congress needs to re-debate the agency’s structure.

“Each month that goes by, it’s easier to make the case that CFPB is doing its job,” Donner said. “These questions have been asked and answered.”

Richard Hunt, the head of the Consumer Bankers Association, which represents the largest U.S. banks, has sought to change the structure of the consumer agency since it became law in 2010, and argues that a commission would ensure a “diverse set of experiences” influence CFPB’s work. “This is common sense,” Hunt said.