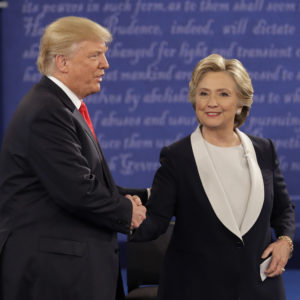 “Locker room talk,” rape allegations, 33,000 missing e-mails, and the war with ISIS were the hottest topics during the second presidential debate between Democrat Hillary Clinton and Republican Donald Trump. While those concerns certainly deserve attention, perhaps the greatest threat facing America is one that received virtually no consideration at all on Sunday night: the United States’ growing debt crisis.

When Barack Obama was running for president in 2008, he called the growing national debt, which had ballooned to $9 trillion under President George W. Bush, “unpatriotic” and “irresponsible.” Since becoming president, the national debt has exploded, now sitting at close to $20 trillion, which means by the time Obama’s presidency ends about as much debt will have been added under his watch as was added under all other previous presidents combined.

Even more disturbing, trillions of dollars are owed to foreign governments, many of which have leaders that have spoken against the United States and impose policies that deprive people of personal freedom, dignity and respect. America owes $1.24 trillion to China alone, and Chinese leaders have continuously used their nation’s position as one of the United States’ most important debt-holders as a bargaining chip in international economic agreements.

Americans have been hearing about the U.S. national debt crisis for so long it no longer feels to many like a “crisis” at all. And why would they worry when the two most-watched politicians in the world today, Clinton and Trump, have chosen to spend most of their time attacking each other for alleged sex scandals and decade-old comments rather than on solutions to the unsustainable financial situation the country is now in?

The reason the debt crisis is so dangerous is because the U.S. currency’s value is based largely on perception. Unlike in the past, when many nations tied their currency to gold, the U.S. dollar has value because the government says it does and because people, both here and abroad, believe the currency they hold in their hands can be used now and in the future to purchase goods, services, land and other important assets.

When you go to work or sell something you own in exchange for money, you give up something important to you in exchange for currency you believe you’ll be able to exchange for products, services, housing and other expenses. But what if you wake up tomorrow and the dollars in your bank account aren’t worth as much as they were the day before? Without having done anything wrong, you’d lose some of your valuable wealth.

Believe it or not, this is already happening. Inflation has caused prices to slowly rise, which means if you have money in your bank account today and don’t spend a penny, you will actually lose wealth over time. In fact, you would need $1,386 today to match the purchasing power of $1,000 in 2000.

The reason inflation hasn’t already caused a massive economic problem is because the devaluation of the dollar has been relatively slow. But if China and other global economic powers lose faith in the U.S. currency and create a new currency to use for international transactions, Americans’ cash will, almost overnight, become far less valuable. The same problem would also likely occur if the national government continues to spend significantly more money than it has, because these irresponsible practices require money to be “printed” to help pay the country’s bills. If investors ever decide America’s dollars are too risky to put their faith in, the house of cards that has been built by decades of poor fiscal management will come crashing down, and middle-income people will be the ones who suffer the most.

Despite these dangers, Clinton and Trump, as they have throughout the campaign, only spoke about the national debt in passing during their most recent debate, and according to a variety of policy centers and analysts, both candidates’ plans will cost much more money than the country can afford to spend.

If the United States doesn’t bring its spending problems under control in the near future — something that cannot occur without leadership from the nation’s next president — we could face an economic crisis unlike anything we’ve seen in our history.