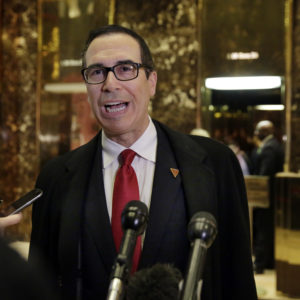 After the 2008 Wall Street bailout, profiteers sucked up too much money.

One of them was then-hedge fund manager Steven Mnuchin, now President Trump’s secretary of the Treasury Department.

Mnuchin used a government backstop to bottom fish a failed savings and loan. Instead of helping beleaguered homeowners with mortgages at this firm, he foreclosed on thousands of them and restructured those mortgages to make the bank more attractive to buyers. His critics dubbed him “The Foreclosure King.”

Had he known he would have to pay misconduct penalties out of his own wallet, he might have operated within the law.

Now, under authority granted to him by the CARES Act — the third COVID-19 economic relief package — Mnuchin will direct who gets more than $500 billion in bailout money and on what terms.

He needs careful oversight, and so do the managers to whom he’ll be writing checks. Congress needs to ensure that trillions in taxpayer dollars don’t, once again, reward profiteers.

As Congress debates a fourth relief package responding to the crisis, lawmakers must put in place tough oversight and accountability measures that cannot be waived by the Trump administration.

Here’s one idea: Withhold part of the paychecks of top executives at bailed-out firms as insurance against potential misconduct, including the misuse of bailout funds.

Congress should require that executives at aided companies who earn more than $1 million defer half of their pay for 10 years. (It can take that long to uncover financial misdeeds.)

If the company is found to have engaged in misconduct — whether it’s from misusing aid, money laundering, abusing consumers, price gouging, lying to shareholders, violating product safety standards or some other infraction — any fine the company pays would come directly from the withheld CEO salaries.

This proposal would give senior executives a strong incentive to police their own companies. If their paychecks were on the line, managers would have good reason to look over the shoulders of their colleagues to make sure they’re honest.

Currently, when oversight agencies or the Department of Justice fine corporations for lawbreaking, the fines are paid by shareholders. Executives seldom face any personal or financial liability.

Infamously, Wall Street shareholders paid more than $240 billion in fines for bankers who caused the 2008 crash, and no senior executive spent even one night in jail.

More recently, Wells Fargo’s CEO walked away with more than $100 million in severance following the fake accounts scandal, while shareholders paid the bank’s billions in fines.

That’s completely backward. Top managers should pay the fines, since they are the ones responsible for the conduct of their companies.

The idea of deferred pay conditioned on good corporate behavior originally came from former Federal Reserve president William Dudley, who advocated for it as part of a set of executive pay reforms he proposed in 2014.

It already exists in various legislative forms that could be incorporated into the fourth COVID-19 relief package. For example, the Wall Street Banker Accountability for Misconduct Act, sponsored by Rep. Tulsi Gabbard (D-Hawaii), applies the model to banks. And the Corporate Management Accountability Act, sponsored by Rep. Katie Porter (D-Calif.), would require all companies to adopt this executive pay reform for their top five officers or explain why they don’t.

When Congress considered the CARES Act, which originated in the Senate, Republicans appeared content to let bailout money pour into corporate coffers without any oversight at all, at least until House Speaker Nancy Pelosi and Senate Minority Leader Chuck Schumer stepped in.

With input from Public Citizen any many other groups, Pelosi’s members, led by House Financial Services Committee chair Rep. Maxine Waters (D-Calif.), and her staff, pushed for several important oversight mechanisms. Senate Democrats succeeded in adding some of them into the CARES Act.

The bill that passed ultimately included a Special Inspector General for Pandemic Recovery, a bipartisan congressional oversight commission and a Pandemic Response Accountability Committee. Personnel is policy, so it will be crucial to ensure that people zealously committed to good-faith oversight serve in these positions.

While tough oversight is important, few incentives keep people honest more than money. The $2 trillion in aid will be a honeypot for some. If it comes with a sting, that might keep some of the bears away.

Neither Congress nor taxpayers should trust a former profiteer like Mnuchin to hold the line against profiteering — or count on corporate executives with a history of mismanagement and wrongdoing to do right by their workers and customers amid an economic crisis when their bottom lines will be strained.

If we want to keep CEOs accountable with bailout funds, we need to make sure they have skin in the game.

Bartlett Naylor is the financial policy advocate for Public Citizen. He wrote this for InsideSources.com.