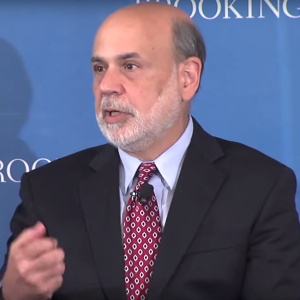 Speaking at a Brookings Institution event in Washington, D.C., Bernanke took issue with Army advertising campaigns that tout skills training in fields such as computer science. According to the economist, studies have shown that veterans don’t in fact have a leg up in these private sector fields.

Bernanke then noted that the unemployment rate for post-9/11 veterans is more than 7 percent — about two points higher than the national average.

“The military takes our young people and uses them for good purposes, but it’s not really adding much to the private sector,” he said.

Foreign Policy reported that some veterans are pushing back on the economist’s comments, with Phil Carter of the Center for a New American Security arguing that “post-9/11 veterans won’t immediately see a benefit from military service due to the time it takes to readjust to private sector work. But, he said, those skills do pay off over time.”

The Brookings event with Bernanke included wide-ranging conversation about various issues related to defense and the economy. For example, the former Fed chairman said a higher federal minimum wage probably wouldn’t have much impact on the military, given that its salaries tend to be competitive. He also lamented that the U.S. government doesn’t spend more on basic research.

Discussion only turned to the 2016 presidential election once, when Brookings scholar Michael O’Hanlon predicted that the nominees of both parties will advocate for a slightly rightward shift on national defense issues:

I would expect, Rand Paul and Bernie Sanders notwithstanding, that most of the political energy in the next year and a quarter, in the presidential election, is going to be to push to the right in defense terms. We will see major candidates of both parties advocating at least modest increases in defense spending, recognizing that threats have gone up a bit.