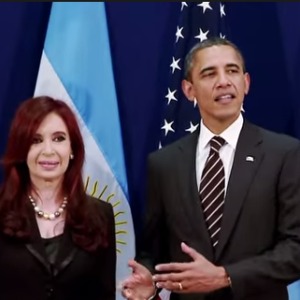 Update: InsideSources has obtained a copy of the transcript from Friday’s hearing: U.S. District Court Transcript

As the U.S. Supreme Court weighs whether to take up the so-called “Debt Trial of the Century” involving Argentina and its creditors, an obscure website has unearthed an internal document from Argentina’s legal team that could severely undermine the nation’s credibility before the Court. Earlier today, the legal team acknowledged in a hearing that it had authored the damaging memo.

The document essentially demonstrates that attorneys representing the Argentine government, including former U.S. Solicitor General Paul Clement, seem to be telling the Court one thing – that Argentina will abide by a lower court ruling requiring the nation to pay its creditors — while privately plotting to default on debt if the country doesn’t get its way in its appeal before the Supreme Court.

The dispute stems from holdout bondholders who refused to accept Argentina’s debt restructurings in 2005 and 2010. Had the bondholders done so, they would have had to exchange their debt at a loss of 65%. While 92% of the bondholders accepted the settlement, the holdouts argue that either they get paid in full, or no one should be paid at all—an argument that has prevailed in lower courts.

Argentina has appealed to the Supreme Court stating in the below passage that if the Court declines to review the case, Argentina will abide by the lower court’s ruling that it pay its holdout bondholders in full—an amount that totals $1.3 billion. Argentina’s legal team claims, “To be clear, absent relief Argentina will comply with the orders under review.”

In other words, they will abide by the Court’s ruling, even though they note that the high amount of debt they would face—a total of $15 billion to all bondholders—could cause them to run the risk of default.

Contrary to Respondents’ assertions, absent relief Argentina will comply with the injunctions; though, since Argentina lacks the financial resources to pay the holdouts in full (what would amount to $15 billion) while also servicing its restructured debt to 92% of bondholders, Argentina will have to face, objectively, a serious and imminent risk of default. Argentina reaffirms its commitment to continue honoring its debts, and hopes not to be forced to face the risk of defaulting.

The problem, however, is that this is not what Argentina’s lawyers are privately advising their clients. In the confidential memo (available here in English), the lawyers representing Argentina advise their client that if the Court does not review the case, Argentina should ignore the lower court’s ruling, default, and restructure its external bonds beyond the reach of U.S. courts.

The memo is signed by Jonathan Blackman, Carmine Bocuzzi and Carmen Correa, who are representing Argentina. Translated from Spanish:

For this reason, we believe that, if the Supreme Court does not decide to review the lower court ruling, the best option for the Republic is to allow the Supreme Court to force a default and then immediately restructure all its external bonds in such a way that the payment mechanism and other related aspects remain outside the reach of the US courts.

In other words, the Argentine government intends to either get its way in court—or it will get its way by defaulting and moving its debt beyond the reach of American courts. This is hardly a positive development for a country which already is viewed warily by international financial markets.

In a hearing today before U.S. District Court Judge Thomas Griesa, Argentina’s legal team acknowledged authoring the memo. A source inside the courtroom says Griesa called the hearing because he was alarmed by the memo advising Argentina evade the U.S. court system. The judge chastised the lawyers for legal advice that would deliver a gravy train for the lawyers, but would create havoc for the country’s debt and the rule of law.