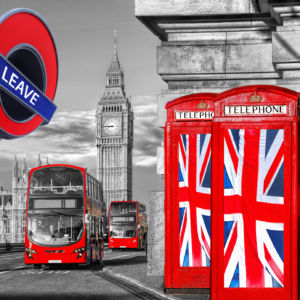 Ahead of this November’s U.S. presidential election, history seems to be repeating itself.  In September 2008, the Lehman bankruptcy triggered a global financial crisis that had an important influence on the 2008 election that swept Barack Obama to the presidency. Now, just as the U.S. election campaign is getting into full swing, Brexit threatens to unsettle global financial markets in a manner that could materially affect the 2016 election.

Brexit also threatens to influence the tone of the U.S. election campaign. It could do so by demonstrating that elections can be won by appealing to voters’ fears about immigration, by campaigning against the establishment, and by raising hopes that electors can take back control of their country.

In the immediate wake of last week’s vote to leave Europe, the U.K. seemingly has already sunk into political turmoil. Prime Minister David Cameron has announced that he was resigning effective in October, senior members in the  opposition Labour Party have launched a leadership challenge to Jeremy Corbyn, and Scottish leader Nicola Sturgeon has announced that a second Scottish independence referendum was now very much on the table. This political confusion, together with uncertainty about the U.K.’s future relations with Euro,  has already resulted in a 12 percent crash in sterling, making it the largest two-day such decline in sterling’s history.

Sadly, there is every reason to believe that over the remainder of this year the U.K.’s political and economic crisis will only deepen. After a highly bruising and divisive referendum that split the ruling Conservative Party right down the middle, one has to expect a drawn out fight for the leadership of that party. One must also expect calls for Scottish independence to grow, which will bring into focus the risk that the United Kingdom could fragment. This will further unsettle U.K. politics at the very time that markets will need to be calmed and that investor confidence will need to be restored.

From a U.S. perspective what is more troubling than the U.K.’s immediate political prospects is the likelihood that the U.K. will soon experience a full blown sterling crisis that could plunge the U.K. economy into recession and that could unhinge global financial markets. Heightening the chances that this will occur is the fact that the U.K. held its referendum at the very time that it was experiencing an external current account deficit of 7 percent of GDP, which is the largest such deficit in the U.K.’s post-war history.

Now that the U.K.’s future relations with Europe will be very much in the air over the next two years, as the U.K. negotiates the complex terms of its new arrangement with Europe, one has to expect capital to flow out of the country. It will also not help matters that financial firms might choose to relocate at least part of their operations from London to Dublin, Frankfurt, and Paris now that they will be losing their “financial passport” to the European market. That will put further pressure on its balance of payments at the very time that the country’s politics are unsettled.

Serious financial and economic trouble in the United Kingdom, the world’s fifth largest economy would of itself be a matter of concern to the United States. However, it is all too likely that the UK’s problems will spill over to the rest of Europe whose economy is already stalling, whose politics are already fragmenting, and which is having trouble in dealing with an immigrant crisis of epic proportions.

Among the reasons for fearing that the British electorate’s repudiation of its elite could reignite Europe’s sovereign debt crisis is that it all too likely will fan the populist wave that is already all too evident across Europe. One indication of those trends is a recent Pew Research Center survey, which found that barely 50 percent of Europeans now think that the European Union is a good idea.

Another indication is the recent Italian local election results, where Matteo Renzi’s Democratic Party government managed to lose Rome and Turin’s mayoralty to Italy’s Five Star Party, which is particularly hostile to Italy’s Euro membership. This hardly bodes well for Italy’s October referendum on constitutional change, which could be converted into a no-confidence vote on the Renzi government and could presage an anti-Europe government in Rome.

Like the Lehman crisis before it, a European-wide economic crisis could send shock waves through the global financial markets well before the time that the US electorate goes to the polls. This is especially the case at a time when serious questions are being raised about the Chinese economic recovery, when the Japanese economy again appears to be entering a deflationary trap, and when Brazil is experiencing a political and economic crisis of its own.

In framing their strategies for the final stretch of the presidential campaign, Hillary Clinton and Donald Trump would be making a big mistake not to be paying attention to the potential global economic and financial fallout from the Brexit referendum.