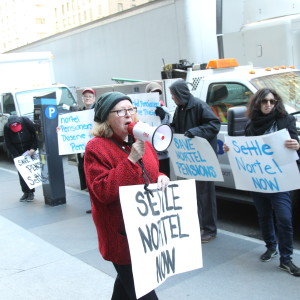 A protestor with a bullhorn and other protestors urge lawyers to settle the Nortel bankruptcy case and save retirees pensions. (Bennett Raglin/AP Images for Settle Nortel)
News

Mediation remains unresolved more than a month after talks first resumed in the seven-year-long battle over Nortel’s $7.3 billion in remaining assets. Legal fees have already consumed about a quarter of those assets.

New progress reports, reviewed by InsideSources, reveal that the British lawyers and accountants representing creditors to the European, Middle East, and African (EMEA) operating unit of Nortel, have been paid far more than their American and Canadian counterparties. This comes despite the EMEA group having a much smaller claim on Nortel’s assets.

As InsideSources has previously reported, this same group appears to be serving as holdouts in mediation talks and potentially pushing the battle back to court for litigation that could last several more years.

The new progress reports for the EMEA group, which cover the period up until the latest round of mediation began, show that the lawyers and accountants representing this group have accumulated $735.1 million in fees since 2009. That includes $24 million in fees in the most recent six-month period.

Nortel monitor reports for Canadian creditors indicate $462.8 million in legal and accounting fees. This covers up until September 12, 2015, which is the most recent report.

Legal and professional fees for the U.S. interests totaled $491.3 million through November 2015. This figure is based on Nortel Monthly Operating Reports.

Sources offer a few possible explanations for the higher fees. The EMEA group has three sets of counsel, based in the U.K., U.S., and Canada, whereas the American and Canadian groups do not. Additionally, the U.K. lawyers typically bill at higher rates, and those rates are in British pounds, which have a high exchange rate versus the dollar.

The EMEA group remains the holdout in mediation, according to sources. InsideSources has repeatedly requested comment from Alan Bloom of Ernst & Young UK and Gavin Davies of Herbert Smith Freehills. Both firms represent the EMEA group. They have not responded.

Angela Dimsdale Gill, a partner at Hogan Lovells, which represents the U.K. pension estate, the largest creditor in the EMEA group, contests the characterization of the EMEA group as a holdout in mediation. She would not comment further on what is a confidential process other than to explain: “[O]ur clients are, and have always been, more than willing to settle on reasonable terms. The people they represent are 33,000 in number, elderly, and vulnerable, and have too much at stake for us to behave otherwise.”

If a settlement is not reached by April, the case is set for appeal, a process that could take several years and billions more in legal fees.