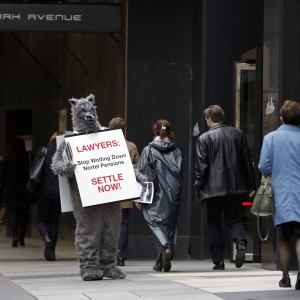 The message to lawyers from a protestor in New York "Stop wolfing down Nortel pensions," October 28, 2015. (Adam Hunger/AP Images for SettleNortelDemonstration)
News

Mediation talks resumed today in New York for creditors of Nortel, the former Canadian telecom giant. Bondholders and pensioners are battling over a shrinking pool of assets, but regardless of the mediation outcome, the lawyers and accountants have already won, as they have claimed over $2 billion in fees.

Nearly seven years ago, Nortel filed for bankruptcy protection. It seemed like an impossible fall for the former multinational telecom giant that at its height employed 100,000 people and held one third of the value for the entire Toronto Stock Exchange.

After selling off its assets, Nortel was left with $7.3 billion, only about 2 percent of the company’s peak market value, to pay creditors, including bondholders and pensioners.

But that money has yet to be distributed as lawyers and accountants representing five different groups of creditors have already racked up over $2 billion in fees since 2009. That is 27 percent of the total assets left to pay creditors, and the mediation could drag on for some time, accumulating much higher fees.

This is the latest chapter in the case that had a highly-unusual and unprecedented ruling in May when judges in both Canada and the United States simultaneously decided in a video-linked trial to pay all creditors pro rata. This ruling could give each creditor, including the 20,000 Canadian pensioners, as much as 71 percent of what they’re owed.

But that doesn’t mean this battle is over. Appeals are still likely, and the cases could easily reach the high courts in both the United States and Canada. Such a prolonged battle would continue to rack up legal fees, which is why many creditors are hoping for an agreement to be reached in mediation.

The question, according to some familiar with the proceedings, is whether the lawyers want this case to end. In a bankruptcy that has already raked in fees over $2 billion, a battle going to the supreme courts of Canada and the United States could be an attractive outcome for lawyers and accountants. But for their clients, some expert observers wonder why a settlement has yet to be reached.

“In a rational world, you’d think that the prospect of incurring these costs would have been a strong incentive for the parties to settle, but this didn’t happen,” explains Anthony Duggan, a professor at the University of Toronto School of Law in an email to InsideSources. “Furthermore, unless the mediation is successful, there’s the strong prospect of appeals in both jurisdictions from the two first instance rulings. This will mean another round of coordinated hearings, further very substantial legal costs and the corresponding further significant erosion of the funds the parties are fighting over. It really is hard to believe that the parties still seem intent on slogging it out in these circumstances.”

The bankruptcy process has been a very profitable opportunity for a tight-knit group of lawyers. Research conducted by InsideSources suggests lawyers representing several of the parties in the cases, along with some of the judges, have worked on other high-profile insolvencies and have been involved with some of the same professional organizations or spoken on panels together.

Critics charge that the Nortel proceedings are being negotiated by a cartel with an interest in dragging out the case. And this is nothing new for this small group of top Canadian lawyers. Referring to a different insolvency in 2004, Ontario’s Hamilton Spectator explained how such cases are a “feeding frenzy” for elite law firms and accountants. One unnamed source in the article said: “‘These guys know each other, know their abilities and, frankly, know the fact that they’re the cream of the crop when you throw around (firm) names’ such as Paliare, Lenczner, Gowlings and McCarthy […] ‘It’s almost like hockey players who go out for beers afterwards.’” Paliare is one of the firms involved in the Nortel dispute.

Drawing much of the scrutiny has been the court-appointed monitor of the case, Ernst & Young, which has failed to properly report fees in Canada. Ernst & Young’s managing partner responsible for the case along with one of the investment bankers advising on the case have billed time for drinks from the pool of money owed to pensioners.

Jay Carfagnini, the attorney representing Ernst & Young, has worked on a wide range of insolvencies with attorneys representing the litigants and his client. Murray McDonald and Alan Bloom of Ernst & Young, along with Kenneth Rosenberg of Paliare, counsel to Canadian Creditors Committee representing the Ontario Pension Benefit Guarantee Company, and Mark Zigler of Koskie Minsky, counsel to Canadian Creditors Committee representing Nortel Pensioners and Ex-Employees, have frequent overlaps in their resumes on bankruptcies, including Air Canada, Eaton’s, Dylex, JTI MacDonald Tobacco, Laidlaw, and Quebecor World.

As mediation continues to drag on, the creditors see their pool of money evaporate, and the lawyers and accountants keep adding to their earnings.

“The costs being billed in this case are well beyond anything I have ever seen and beyond what is reasonable in the circumstance,” says Peter Warrian, the former chief economist for the Province of Ontario and now a senior fellow at the Munk School at the University of Toronto. He tells InsideSources: “There is no obvious way to bring closure to the process unless one or more of the directly affected parties takes an action. Meanwhile the lawyers just bill for showing up.”