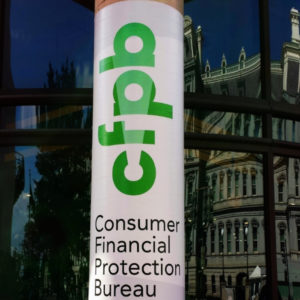 Thanks to the internet, the haggard and bleary-eyed employee sitting at the storefront “Complaints Department” is long a thing of the past. Of the billions of online financial transactions that occur today, a good many involve complementary activities such as returns, product reviews and even consumer complaints. Voicing complaints online has brought immense power and convenience to consumers, but also lead to complicated problems, a prime example of which entails the Consumer Financial Protection Bureau (CFPB).

Ultimately the bureau’s scope was expanded to operate as an independent agency with unlimited oversight and enforce consumer finance laws.

Created with benign intentions, the CFPB became overly burdensome and duplicative in its rulemakings, systemically ignoring consumer protections while leaving major consumer-oriented industries in the dark, unable to operate effectively. This brought undue harm to businesses trying to play by the rules, and limited access to basic financial products and services for U.S. consumers. As an example, one can simply look at the adverse effect inadequate regulations and rulemaking have had on the third-party debt collections industry.

As any regulatory agency does in good practice, the CFPB established a consumer complaint database to receive feedback from consumers on their financial service providers and assist with issues across all industries. Each month, the Bureau issues reports based on the complaints it receives. From the outside, the debt collection industry is portrayed as the most complained about financial product in the CFPB database, but this is simply misleading.

Many organizations, including government agencies, refer to third-party debt collectors to recover tens of billions of dollars of unpaid obligations — such as accounts receivable, taxes, fines and other consumer-related fees. Just as uncollected taxes or fines can impact local or national government budgets, unpaid debt can affect consumer prices, costs for individuals to get a loan, and impact business performance. And this is where it can be suggested that the CFPB may need to open a complaint department on how they handle complaints themselves.

The problem with CFPB’s handling of consumer complaints lies in its process of unfairly lumping non-similar industries together and not adequately categorizing complaints across various sectors. In monthly reports, the CFPB fails to provide context to its findings, including the total number of consumers using products. Therefore, the Bureau reports raw complaint numbers, not averaged out by consumers using specific products, leading to reports that misrepresent the facts.

There are approximately 77 million debts in collection every year, and the collection industry makes an estimated 1 billion contacts to those consumers each year. Of those 77 million consumers and 1 billion contacts, there are only roughly 48,000 CFPB complaints annually, a complaint rate of just 0.06 percent. However, the CFPB’s reporting methods paint a different picture, one that describes the debt collection industry as the worst of the financial services industries with the highest complaint numbers without ever putting the numbers in context.

Just look at the CFPB’s latest snapshot from last October, where debt collections complaints came in at 23 percent of all complaints received, ranking them as the top complained about industry without accurately representing consumer reporting. In addition, due to poor methodology, some of these “complaints” are comments and inquiries, not complaints at all — a major misrepresentation.

There’s much work to be done to solve some of the complex problems certain financial industries are faced with to protect consumers and businesses that serve them. The CFPB should consider updating its methodology and reporting to adequately inform consumers about the various financial products and services they rely on. With new leadership, the CFPB has the opportunity to get back on track and carry out the mission it was created to accomplish.

Gerard Scimeca is an attorney and vice president of Consumer Action for a Strong Economy, a free-market advocacy organization. He wrote this for InsideSources.com.