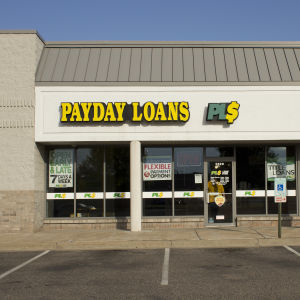 The Consumer Financial Protection Bureau (CFPB) may scrap some underwriting requirements for payday loans, which would make it easier for payday lenders to provide the loans and easier for some borrowers to procure them.

The underwriting requirements in question are part of the CFPB’s payday lending rule, which the bureau spent five years working on and which the last director and the current one, Mick Mulvaney and Kathy Kraninger respectively, seek to backtrack.

This part of the rule requires payday lenders to underwrite loans for borrowers who obtain more than six payday loans in a year. Lenders must verify the borrower’s income and examine the borrower’s other debts and spending. In other words, they must evaluate a borrower’s “ability to repay.”

The purpose of this provision is to prevent borrowers from falling into a long-term debt trap, as payday loans usually come with interest rates upward of 300 percent. If payday lenders believe a frequent borrower is unable to pay back the loans, they can refuse to provide more of them.

Rebecca Borné, senior policy counsel with the Center for Responsible Lending (an anti-payday lending advocacy group), told InsideSources she doesn’t see how nixing this provision will be good for consumers.

“What this would do is have devastating consequences for some of the country’s most financially distressed,” she said. “It would mean that payday lenders can continue to trap borrowers in 300% percent APR unaffordable loans that lead to a long term debt trap.”

Borné thinks such a reversal only supports the “predatory” payday lending industry, and said it is “disappointing if [the bureau] is already willing to undo what [it] spent five years very carefully developing.”

“It’s possible the bureau would say they would rely on better disclosures instead to address the debt trap,” she added. “We would just point out that the bureau, through multiple studies, found disclosures would not solve the problem. The financial incentive [for payday lenders] to get people stuck in the debt trap is just too strong.”

But there is some debate over whether the research supporting certain aspects of the payday lending rule are truly comprehensive or accurate. Some economists — including some from Berkeley’s Haas School of Business — argue there isn’t enough thorough research on payday lending or financial distress situations.

Daniel Press, a policy analyst with the Competitive Enterprise Institute (CEI), published a paper last year outlining how the CFPB ignored some aspects of payday lending research to support its payday lending rule, like the fact that 80 percent of payday loan users said the loans were easy to repay and only 2 percent said they disliked the loans “because they made it too hard to get out of debt,” according to surveys conducted by economists on the Federal Reserve’s Board of Governors.

The high APR is a consequence of the high default rate: the average default rate for payday loans is 20 percent compared to 3 percent for commercial banks.

Restricting or eliminating the payday lending industry, he argues, would only hurt the poor and the financially struggling.

“Small-dollar loans, such as payday loans, predominately support employed individuals who are trying to stay afloat between paychecks when they run short on cash, often because of an emergency,” he writes. “For financially strapped consumers, small-dollar loans are often a better option than the available alternatives, such as overdrawing a bank account or defaulting on a different loan. Defaulting on traditional forms of credit can ruin a person’s credit score and cost more than taking out a small loan.”

Furthermore, he argues, the “ability to repay” standard for frequent borrowers doesn’t make sense because “if borrowers had an immediate ability to repay— including a month of no financial trouble — they would have no need to patronize payday lenders in the first place. Instead, they would access traditional sources of credit, such as their own savings, credit cards, or bank loans. Such options are not available to the majority of payday borrowers, who know that they may have to string together multiple loans.”

In other words, the payday lending industry exists because there is demand for it, so the CFPB shouldn’t hamper it, despite recent studies showing that greater loan availability in general “leads to more financial difficulty.”

The problem, as Borné put it, really comes down to financial incentives for payday lenders and borrowers, which enable the cycle of debt.

But, as economists on both sides of the issue have found — and as Press states — there isn’t enough empirical evidence to show that the average borrower is tricked into a predatory payday loan, but the payday lending does encourage the debt cycle, so the real question is, how to stop borrowers from getting stuck in the debt trap in the first place?