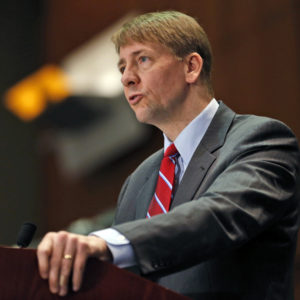 In this March 26, 2015, Consumer Financial Protection Bureau Director Richard Cordray speaks during a panel discussion in Richmond, Va. Republicans are urging President Donald Trump to fire Cordray, and some Ohio Democrats focused on next year’s race for governor say go for it. (AP Photo/Steve Helber, File)
[IS] Opinions

We’re on your side. That is the motto of the Consumer Financial Protection Bureau, which was created during the Obama administration to ensure banks, lenders and other financial companies “treat you fairly.”

Lately, the CFPB’s rulemaking has been a popular topic for debate, especially following the Court of Appeals for the D.C. Circuit’s critique of its unconstitutional structure. Adding fuel to that fire, in an ironic turn of events, the CFPB recently dealt a heavy blow to the exact group of people it purports to protect — consumers.

Arbitration involves a third party who examines evidence from both the company and the consumer and then issues a decision. Many companies value the flexibility in choosing their arbitrator and the potential to avoid lengthy, expensive lawsuits.

Consumer advocates lauded the agency’s Arbitration Rule, as they believe citizens finally have their day in court. Little do they know; this move is nothing more than political grandstanding that allows trial lawyers to reap a hefty windfall at the expense of consumers.

In a recent New York Times opinion piece, CFPB Director Richard Cordray claims lawyers collect only a “small portion” compared with consumers, but in its own study the CFPB found evidence that proves the exact opposite. The study found that consumers are more likely to be fairly compensated from arbitration than class-action lawsuits.

Out of the 251 class-actions it studied, the CFPB found the average payout to consumers was a measly $32. The study also found that 87 percent of class-action lawsuits resulted in absolutely no payout at all. Not to mention, it concluded arbitration is up to 12 times faster than litigation. The cost barrier to file a complaint under arbitration is half of what it costs to file a new complaint in federal court.

While this evidence indicates consumers don’t benefit at all from the arbitration rule, there is one data point that illustrates why the CFPB might have proposed it in the first place. Interestingly enough, buried deep within the 728-page report, the CFPB does identify one group with a lot to gain from such a rule: trial lawyers. In the 251 class actions studied, lawyers received a windfall of $424 million.

Coincidentally, it appears Cordray (a former lawyer and former attorney general of Ohio) is eyeing Ohio’s 2018 gubernatorial race. To do so, Cordray would have to leave the bureau before his term expires in July 2018, making the arbitration rule one of his final acts before his departure. What better way to fund a campaign than by using his trial lawyer friends who now owe him a large favor thanks to the large sum of money he just handed to them?

While the CFPB might have tricked some consumers into believing the arbitration rule is meant to help them, it is clear that the arbitration rule is no more than a glorified class action lawyer enrichment rule. Cordray’s attempt to cast this rule as a pro-consumer measure is extremely disappointing. We should not allow the CFPB to pre-empt the traditional means of regulation through government by way of “regulation through litigation.”

Thankfully, Republicans in the House recently passed legislation to undo this ill-conceived rule under the Congressional Review Act (CRA) and the Senate is poised to take up similar legislation upon return from August recess.

House Financial Services Committee Chairman Jeb Hensarling, R-Texas, calls this CRA “a critical step towards fulfilling our promise to the American people and truly protecting consumers.” Additionally, Senate Banking Committee Chairman Mike Crapo, R-Idaho, called the rule “another example of the CFPB’s lack of accountability.” Crapo also criticized the CFPB’s research, saying, “Given the problems with the study and the Bureau’s failure to address significant concerns, it is not only appropriate but incumbent on Congress to vote to overturn this rule.”

I hope that others in the Senate will work together to repeal this rule that puts trial lawyers over consumers.