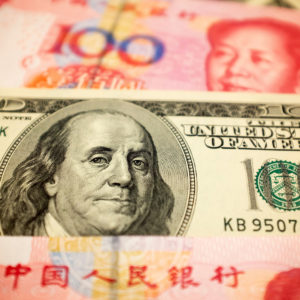 The major economic policy challenge facing the Bank of China is that of engineering a soft landing for the Chinese economy following an extraordinarily large credit and housing market bubble. A good indication of the size of that credit bubble is the fact that, over the past decade, credit to China’s non-financial non-government sector has increased by almost 100 percent of GDP. That credit expansion is larger than those that preceded the 2007 U.S. housing bust and Japan’s lost decade in the 1990s.

With signs that the Chinese economy is now starting to slow as credit standards are being tightened, the Bank of China would want to ease monetary policy and allow the currency to depreciate. It would want to do so in order to provide a policy offset to the contractionary effect on the economy coming from the deflating of the credit and housing market bubbles. By so doing, it would in effect be doing what the Federal Reserve did in 2008 in the wake of the Lehman bankruptcy crisis when it substantially eased U.S. monetary policy and facilitated a dollar depreciation to soften the fallout from Lehman.

Yet another reason the Bank of China might now want to have the Chinese currency depreciate against the U.S. dollar is that the dollar is now appreciating strongly against most other currencies. The dollar is doing so, and it must be expected to continue doing so, in the context of the U.S. economy growing strongly partly as the result of a major U.S. fiscal stimulus at this late stage in the U.S. economic cycle.

Compelling as these reasons might be as to why the Bank of China might wish to engineer a Chinese currency weakening, there are strong counter arguments as to why this could be a problematic course of action for it to adopt.

Among those is the fact that even before he came to office, President Trump has consistently accused China of manipulating its currency for competitive advantage. If China were now to allow its currency to keep sliding against the U.S. dollar, it would court incurring President Trump’s righteous anger no matter how justified China might be in doing so. That in turn would provide yet more fuel to the United States and China spiraling down to a highly destructive full-scale trade war.

Another reason that the Bank of China needs to be cautious about letting its currency depreciate is that it could easily lose control of the process. It could do so as the Chinese public lost confidence in the value of their currency and rushed to ship their money to safer havens abroad. That was the lesson in 2015 when an earlier Chinese currency appreciation led to massive capital flight from China of $1 trillion.

All of this leaves the Bank of China with the most difficult of policy choices. It can choose to desist from depreciating its currency at a time that it is deflating its credit bubble but then risk a sharper than desired economic slowdown. Alternately, it can support its economy with a currency depreciation but risk further worsening U.S.-China trade relations and risk fueling a renewed round of capital flight.

All of this also casts a pall over the global economic outlook. After all, China is the world’s second largest economy and it has for long been the world economy’s primary engine of economic growth. It also has been the main consumer of international commodities. As a result, as Napoleon might have put it, we might soon find out that when the Chinese economy slows down the rest of the global economy will shudder.