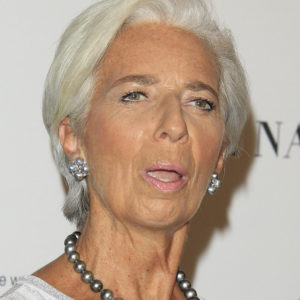 The timing of Christine Lagarde’s scheduled replacement of Mario Draghi as head of the European Central Bank (ECB) has to remind one of a prescient cover that The Economist magazine ran in 2006 when Ben Bernanke took over from Alan Greenspan as Federal Reserve Chairman.

That cover showed Messrs. Greenspan and Bernanke in a relay race with the baton being passed by Greenspan to Bernanke being a stick of dynamite. A few months later, the great U.S. housing bust began.

In the case of Madame Lagarde, the dynamite stick that she might be receiving from Draghi could be in the form of the United Kingdom crashing out of Europe. By an unfortunate coincidence of timing, Madame Lagarde is scheduled to begin her new job as head of the ECB on November 1. That is exactly one day after the U.K.’s extended October 31 deadline to reach a Brexit agreement with its European partners.

Heightening the chances that the U.K. could crash out of Europe on October 31 is the fact that Boris Johnson is almost certain to replace Theresa May as prime minister.

In his campaign to replace May, Johnson has repeatedly committed himself to have the United Kingdom leave Europe with or without a deal on October 31. Making this commitment all the more credible is Nigel Farage’s threat to tear the ruling Conservative Party apart limb by limb if the U.K. does not leave Europe by that date. Making a hard Brexit all the more likely is Europe’s strong resistance to re-opening the Withdrawal Agreement that it took two years to negotiate with May.

The economic damage to the U.K. economy from a hard Brexit is not to be underestimated. According to the Bank of England, the IMF, and the OECD, such a worst-case scenario would almost certainly precipitate a deep U.K. economic recession with GDP likely to decline by more than 5 percent in the year following its European exit.

It would do so as the U.K. would lose its current favored access to the Single European Economic Market, which currently buys as much as half of all the U.K.’s exports. It would also seriously disrupt international supply chains as investors would choose to relocate their operations out of the U.K. and toward the continent.

A hard Brexit would also deliver an unwelcome shock to an already stuttering European economy. This is not simply because the UK remains a major European trade partner and accounts for as much as 40 percent of Ireland’s total exports. It is also because the sharp fall in sterling that would almost certainly follow a hard Brexit would meaningfully improve the U.K.’s international competitive position relative to that of Europe.

Among the European economies, heavily indebted Italy with its weak banking system is particularly vulnerable to a Brexit related shock. Verging on recession, Italy is already having difficulty in containing its budget deficit and in strengthening its banking system. In her early days in the job, the last thing that Madame Lagarde would need is another round of the Eurozone debt crisis centered on its third-largest member country.

It is hoped the United Kingdom will somehow avoid a hard Brexit, Italy’s populist government will get its act together, and Trump will refrain from imposing his threatened import tariff on European automobiles.

However, Madame Lagarde would be ill-advised to count on such good fortune. Rather, along with the rest of us she should be hoping for the best but planning for the worst in the few weeks before she takes on her new responsibilities. Or as she is so fond of saying, she should start fixing the roof while the sun is still shining.