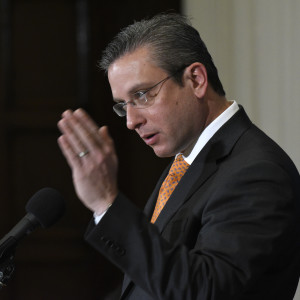 When someone has trouble handling money, you generally don’t just give them more money. That would be like giving an alcoholic another drink and hoping he’ll sip water instead.

So it is with Puerto Rico. Like Greece, like Detroit, it is teetering on the edge of bankruptcy ($72 billion in debt) due to appalling excesses such as handing out $120 million in Christmas bonuses to government employees this Christmas (while most taxpayers, who foot the bill for such things, were working overtime to find the money to pay for their children’s presents).

Christmas is not the only time that government workers in Puerto Rico cashed in at taxpayer expense. They also get twice the paid vacation that their counterparts on the mainland receive. While you work, they play – and get paid.

Now the gravy train is in peril of drying up and Gov. Alejandro Padilla wants you to pay again – by declaring bankruptcy and defaulting on Puerto Rico’s debts.

The bill would go to mainland taxpayers this time.

What makes this story particularly obnoxious is that Padilla sought out private investment capital to balance the books, promising investors the government would never (fingers crossed!) seek or declare bankruptcy protection … while at the same time hiring bankruptcy advisors under the proverbial table (see here).

Minimally, this is evidence of bad faith. Arguably, it is willful misrepresentation.

Even more obnoxious, the bankruptcy advisor hired by Padilla turns out to be former Obama Administration Communications Director Anita Dunn, who now works for SKDKnickerbocker, a “strategic communications” (read, PR) firm in Washington. Dunn was forced to resign after being recorded making embarrassing comments in public praising the communist mass-murdered Mao Zedong during a high school graduation speech. She described Chairman Mao – who disposed of the lives of tens of millions of his countrymen – as one of her “favorite political philosophers.”

Now she wants to dispose of your money.

Even though she is out of government, Dunn still regularly visits the White House (at least 100 times since her departure from government in 2009). These are not social calls. Dunn schlepps to the White House on behalf of SKDKnickerbocker – whose clients, in addition to Padilla, include for-profit enterprises such as Kaplan University and the developer of the Keystone XL pipeline.

Now, there’s nothing wrong with being for-profit. The issue is profiting at the expense of taxpayers. In particular, profiting off the people who’ve already cost taxpayers billions.

Tragically, some Republicans – including Speaker of the House Paul Ryan – appear to be on board. No wonder Trump is ascendant. People have had enough of government apparatchiks freely giving away their hard-earned money to failures.

Whether the big Wall Street banks (as happened after the crash of ’08) or the big governments of Detroit and now – possibly – Puerto Rico.

What’s particularly worrisome about the prospect of Puerto Rico successfully obtaining the bankruptcy default it seeks is that a precedent in law will be set for other such bankruptcies – from the local to the state level. If San Juan can declare bankruptcy and welsh on its debts, why not Chicago or any other city swimming in its own sea of self-created red ink? Why shouldn’t states be allowed to walk away from their debts, too?

Bear in mind, it’s not the cities or the states that end up with the bill. It’s you and me – the people forced to pay the taxes that fund everything the government (at all levels) does. Government has no money except the money it takes from the taxpayers.

Rather than throw good money after bad, why not impose some market discipline on the spendthrift government of Puerto Rico? Dial back the unconscionably generous (with other people’s money) bonuses and pensions doled out to government employees, for openers? At minimum, Puerto Rico should be made to account for the money it spends – so that the people who provide the money being spent have some idea where it’s being spent, and how it’s being spent.

As Senate Finance Committee Chairman Orrin Hatch has observed, the government of Puerto Rico hasn’t even been willing to do that… for years.