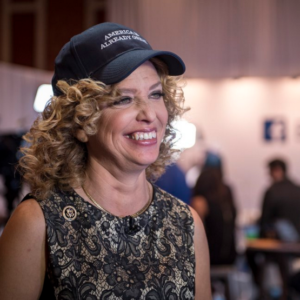 Posted to Finance May 09, 2016 by Carter Dougherty

Florida’s small-dollar lenders thought they had a political patron in Rep. Debbie Wasserman-Schultz, the Florida congresswoman who heads the Democratic National Committee. Instead they are proving how dangerous it has become for Democrats to cross their liberal wing on financial regulation.

A straightforward signal of support for an industry that has long had friends on both sides of the aisle in Florida has turned into a national political liability for Wasserman-Schultz. Her primary opponent has seized on the issue as a new and welcome vulnerability, while liberal groups have exploded over her backing for legislation that would bar new rules on small-dollar lending.

Those campaigning against Wasserman-Schultz are working to clear the way for the Consumer Financial Protection Bureau, the new regulator created by the 2010 law overhauling lending regulation, to issue the first-ever federal rules on payday lending. Liberal activists now have the tantalizing prospect of winning a long battle against payday lending — and swatting down a top Democrat in the process.

“If the Congresswoman wants to demonstrate her commitment to the hardworking men and women of this country that payday lenders prey upon each day, she can start by withdrawing her support for this problematic legislation,” a group of liberal organizations including Allied Progress and the Center for Responsible Lending wrote in an open letter last week.

Allied Progress, run by Democratic political operative, Karl Frisch, has unleashed a merciless public relations campaign against Wasserman-Schultz. The group has mocked her support for the bill with the hashtag #DebtTrapDebbie, and has helped trigger a push by some parts of the party’s liberal wing to boot her from Democratic leadership.

Geoff Burgan, a spokesman for Wasserman-Schultz, declined to say whether the congresswoman would withdraw her support for the legislation. But he highlighted her subsequent backing for another bill that would impose other restrictions on payday lenders, known as the Safe Lending Act.

Burgan also provided a list of 4 other votes in which Wasserman-Schultz voted against Republican efforts to restructure the CFPB, or restrict its funding. “She has clearly stated that she trusts the CFPB to do what’s right for consumers,” Burgan said.

The furious mix of activity, politics and policy, stems from plans by the consumer bureau to propose the first set of rules by a federal agency aimed at the payday lending industry, probably by the end of May.

Payday lending started as a simple form of credit in which consumers borrow a small amount of money, as little as $100, and agree to pay it back in 2 weeks. As collateral, borrowers leave behind a post-dated check for the amount borrowed, plus a fee that in itself can be small, perhaps $10.

However, since federal law requires lenders to express the cost of borrowing in the annual percentage rate, the interest rates can be fairly hefty. For example, borrowing $100 for 2 weeks for a $10 fee results in an APR of 260 percent.

In the last decade, the payday lending industry has grown and transformed into a business that populates storefronts in the roughly 25 states where it’s legal. Loans are also available online in ever-changing permutations: longer terms, lower interest rates, lines of credit and the like. But they still have in common far higher interest rates than credit cards and other forms of small-dollar credit.

The interest rates have led consumer advocates to brand payday lending “legalized loan sharking,” and they’ve highlighted stories of people who draw their second high-interest loan to cover the first, and find their debt snowballing. Payday lenders have defended their business as a way for consumers who can’t otherwise qualify for credit.

Payday lenders have long enjoyed bipartisan support at the state level, especially in Florida, which debated and passed a regulatory regime for payday lending in 2001. The result was, depending on your view of the issue, a blossoming landscape of businesses or the proliferation of predatory lenders.

What no one disputes: there are a lot of payday lenders in Florida. “You don’t see tons of advertising because they are simply ubiquitous,” said Alice Vickers, head of the Florida Alliance for Consumer Protection. “Their storefronts are advertisements enough.”

Because poorer Floridians and those from minority groups tend to be on the margins of the financial system, their neighborhoods are fertile ground for payday lenders. They even tend to congregate around historically black colleges and universities.

Jabari Paul, the political director for Faith in Florida, an activist group, said churchgoers’ experiences with payday lenders have multiplied to the point where it’s an issue for his group as well. One member of his congregation in the Tallahassee area took 3 years to pay off a $500 loan by paying $125 in interest every month.

“These are the types of stories we hear every day. That’s why you hear a moral voice from faith groups in Florida,” Paul said.

Florida passed its payday lending law in 2001, and advocates for the industry tout it as a measured compromise between banning the product outright and having no guidelines at all. It limits customers to one loan at a time — the loans are entered into a database, so borrowers can’t simultaneously patronize multiple lenders at once — and allows a grace period if a person can’t pay off a loan. The law did not cap interest rates.

“What resulted was pretty strict, onerous regulation,” said Jamie Fulmer, senior vice president for public affairs at Advance America. “A lot of lenders closed. The market pruned itself of the bad actors.”

Longtime critics of payday lending, such as the Center for Responsible Lending, have countered that the Florida law warrants no praise. In the year ending in May 2015, Floridians paid $311 million in interest to payday lenders, at an average APR of 278 percent. Though the number of lenders dipped after the 2001 law, the volume of payday loans have edged steadily upward.

The CFPB proposal is expected to impose requirements on payday lenders — loans with terms of 45 days or less — to collect information confirming that borrowers have the ability to repay their loans. Or, lenders could limit borrowers to loans of no more than $500, with a 90-day term. The general idea behind the rules is to force lenders to either make loans that don’t result in the “debt trap” of constant loan rollovers, or simply limit the time a person can be indebted.

The CFPB’s research and the payday lending industry itself has concluded that the regulations will unquestionably shrink the industry in the sense that loans currently made today will no longer be legal. By the CFPB’s own estimate, this market could shrink by two-thirds. It’s possible that lenders will find ways to serve borrowers at lower interest rates, creating a thriving — but affordable — market for people who can’t get access to credit.

But it may also create a scramble among lenders to serve only the customers whose creditworthiness can be effectively determined.

“What you will see is a form of cream-skimming,” said Hilary Miller, a longtime lawyer for the payday industry. “The survivors will make the good loans and the borrowers with the fewest options will be excluded from the legal market.”

Wasserman-Schultz dropped into the payday lending debate when she agreed earlier this year to co-sponsor H.R. 4018, legislation that would impose a 2-year moratorium on CFPB rulemaking, and then exempt states, like Florida, that have their own system of regulations. The response from progressive groups was vociferous.

Many, like Allied Progress, took to jeering Wasserman-Schultz on Twitter and speaking out about the issue publicly. Groups that pushed for the creation of the CFPB made a simpler point: Wasserman-Schultz was siding with the financial services industry, bucking the increasingly strong progressive wing of her party.

“The CFPB has repeatedly shown it is willing to listen to industry concerns and to calibrate its policies in response,” the Leadership Conference on Civil and Human Rights wrote Wasserman-Schultz. “It does so on the basis of hard evidence, however, and not on the basis of a politicized process in which the interests of vulnerable consumers are given short shrift because they do not have the resources to be heard.”

Wasserman-Schultz’s opponent in her congressional primary, which doesn’t take place until August, also piled on.

Not only is Wasserman Schultz carrying water for an industry that is actively defrauding poor communities out of millions of dollars … but she is actively convincing Democrats in Congress to do so as well,” Tim Canova, the Florida Democrat challenging Wasserman-Schultz, wrote to his supporters. “Which party does she lead again?”